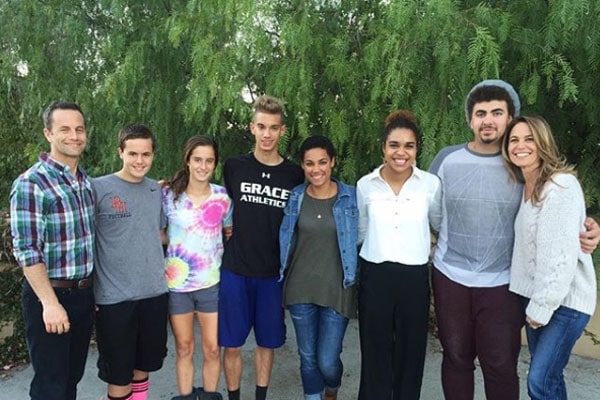 Chelsea Noble and Kirk Cameron, have been enjoying their marital life since 20th July 1991. Both are well-known actors and have worked on numerous projects. Kirk is known for his roles in Growing Pains, Saving Christman, whereas his wife Chelsea is known for Left Behind II: Tribulation Force and Growing Pains. They are not only well-accomplished actors but also proud parents.

Kirk Cameron and wife Nancy Cameron aka Chelsea Noble wanted to adopt a child before bringing their own to this world. They wanted to make sure that their adopted kids know they were first and are equally important, no less. So, Kirk and his wife adopted their first child a boy and decided to name him Jack.

Kirk Cameron’s son Jack Cameron went to Trinity Pacific Christian School. When small, he was really into making figures from Lego and music. However, he later made up his mind and chose the ways of his father and opened his heart to faith. And now Jack is a director at the 2nd Mile Church.

Besides being a director, he is also a photographer and a filmmaker. In fact, he has an Instagram account dedicated to his photography named jackFilm. As well as a website. Speaking of his love life, Jack is currently married to Kaylee Cameron. Both had a lovely wedding, pictures of their wedding were shared by sister Isabella Cameron.

Moreover, the couple looked lovely together and the chemistry they share was adored by all. Jack Cameron’s wife Kaylee Cameron was looking gorgeous in white.

Kirk Cameron’s daughter Isabella Cameron is the second oldest child in the Cameron family. She is a social worker, in fact, she can be spotted doing volunteer work in the nearby church. Besides that, she has also appeared in the movie Saving Christmas. It was a small cameo where she played the part of a party girl. After that, she has not exactly focused on acting.

Talking about her relationship status, she is engaged to her long-time boyfriend Justin Moore. She shared a post where her partner was spotted proposing her and she said yes. The couple also has a YouTube channel Us, Moore or Less dedicated to their relationship where they have uploaded the whole video of Justin proposing Isabella.

Isabella Cameron’s name is of Hebrew Elisheva origin, meaning God is perfection or God is my oath.

Kirk Cameron’s daughter Anna Cameron practiced ballet and singing in her early years. But now she spends her free time helping people. In fact, she is a social worker and loves lending her hand in volunteer works. In collaboration with her sister Isabella, she organizes charity works. Both the sisters’ duo have been involved in numerous charity works and fundraising projects. We can just say helping people runs in the family. And the sisters’ duo is no exception.

Furthermore, Anna not only spends time helping people but also developing a bond with her siblings. She often meets with her brothers and sisters and they usually spend time having a little chat and a couple of drinks. She has posted a couple of photos with her siblings which refects the bond she shares with them. Anna never forgets wishing her siblings a happy birthday and she is always ready to help her brothers & sisters. It shows the caring nature of Anna and shows how much of a great sister she is.

Anna Cameron’s name is a Latin form of the Greek: Ἅννα and the Hebrew name Hannah, meaning favor or grace or beautiful.

Like his elder sibling, Luke is also a social worker. He has been spotted cheering up kids suffering from cancer, trying to entertain them. He believes in sharing happiness and does so where ever he goes.

Speaking of his personal interests, he loves surfing and skiing. He is a pro in surfing and has uploaded videos of him showing his skills in it. Usually, he is accompanied by his mates. Luke and his friends love traveling and hiking. Not only that but he is also a pro in basketball. His skills are well-known by his mates in college.

As foretold by father Kirk and mom Chelsea they wanted to adopt children before welcoming their own. So, after adopting hand full of children in 2001 they finally welcomed their first biological daughter Olivia. Like her elder sister Isabella, she also had a small cameo in Saving Christmas. Unlike her elder siblings, she is an artist and has an Instagram dedicated to her arts and crafts.

Whereas, speaking of her personal life she is a person of privacy. We can just assume that she doesn’t like people interfering in her personal matters which may be the reason why her Instagram is private.

James Thomas Cameron is the youngest addition to the Cameron clan born on April 13, 2003. He also had his fair share of cameo in Saving Christmas. Being the smallest kid in a family is a plus point as you are loved by everyone. And in the case of James, he is adored by everyone.

In addition, in a post shared by his elder sister Anna, she mentioned how James usually ends up entertaining all. She wrote his personality sets everyone at ease when he tends to act like the oldest. She ended by mentioning how proud she is of him and has enjoyed seeing him grow up to become such a nice person.

James Thomas Cameron’s first name is derived from Hebrew name Jacob, meaning supplanter, one who follows. As for his middle name Thomas is of Greek origin meaning twin.

To conclude we can say the Cameron family is the best example of those family who tends to make a difference in this world. Everyone is so nice and they treat everyone equally. We can only imagine how good they were brought up by Kirk and Nancy. Plus, they definitely succeeded in raising their kids and seeing them now we can imagine how proud they must be.