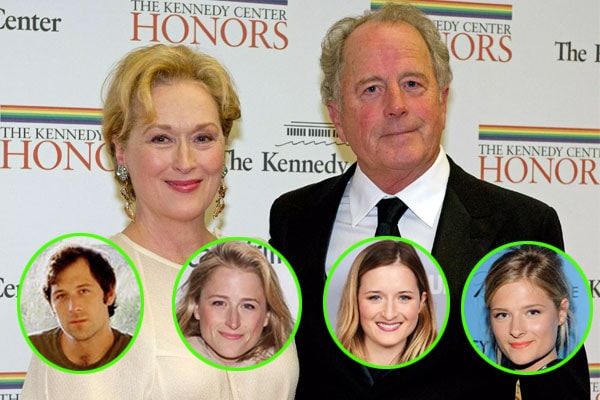 The Hollywood icon Meryl Streep and Don Gummer are the parents of four grown-up children. Their eldest child and only son Henry Wolfe Gummer was born on November 13, 1979.

Meryl Streep and Don Gummer have three daughters. Their first daughter Marie Willa Gummer a.k.a. Mamie was born on August 3, 1983. Their other two daughters are Grace Jane Gummer born on  May 9, 1986, and Louisa Jacobson Gummer born on June 12, 1991.

Meryl Streep’s eldest one Henry is a musician, singer, and songwriter. Henry is one of those people who love to stay low key and enjoy life. The singer-songwriter Henry is busy most of the time performing live. We bet his music, and his style of performing can sway anyone. Until now, he has released three albums and two EPs. Get your hands on them because you won’t regret having a gem.

Like mother like daughter. Not only Marie a.k.a. Mamie resembles her beautiful mother Meryl, but she is also as good as her mother when it comes to acting. She has appeared in several movies alongside her mother including Heartburn when she was only one year and eight months old.

The year 2019 brought lots of happiness in the Gummer family as the beautiful Marie welcomed a baby boy in February with fiance Meher Sethi. Previously she was married to Benjamin Walker from 2011 to 2013. Marie is doing great as a mother and professionally as an actor.

Meryl Streep’s daughter Grace Jane Gummer is yet another one who has followed her superstar mom’s footsteps into the movie industry. Just like her sister Mamie, Grace has also worked together with her mom Meryl in a movie The House of the Spirits. The gorgeous Grace is still actively involved in the industry. She has a successful career in television series.

Grace also has shown her talents in the movie Beast Of Burden when she was cast alongside Daniel Radcliffe.

Louisa Jacobson Gummer Is A Model

The youngest daughter of Meryl Streep, Louisa Gummer is a successful model, and she is associated with IMG. While her other two sisters have already received success as an actor, the beautiful Louisa is also following the trails of her mother and sisters. She is on her last year at Yale University pursuing an acting course.

The acting goddess Meryl Streep and her lovely husband Don Gummer are one of the proudest parents. They are not only happy with the success they have earned but also celebrating their grown-up children’s achievements.