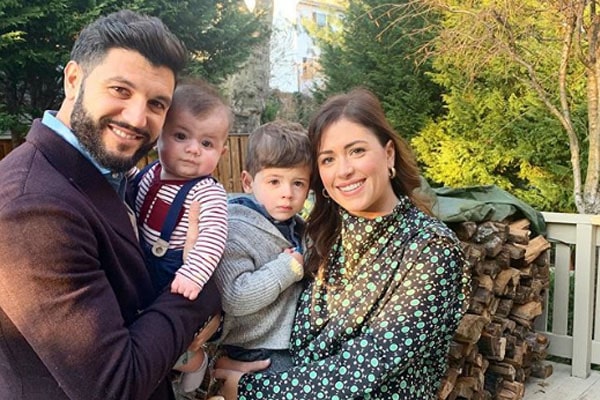 Chloe Melas is an American journalist well-known as an entertainment reporter for CNN. Well, going through her personal life, she met New York restaurateur Brian Mazza in 2012. Then, they married each other in New York on October 25, 2014. Now, the married couple is blessed with two cute sons, Leo DeSales Mazza and Luke Alessandro Mazza.

Chloe’s sons with her husband, Brian Mazza, brought tons of happiness and delight in the family as the married couple became parents to their adorable kids. Leo and Luke are very lucky to have such loving and caring parents. So, let’s know more about Chloe Melas’ sons.

Also Read: Jessa Seewald’s Children Whom She Had With Ben Seewald

Chloe and Brian’s first child, Leo, was born on July 3, 2017. The addition of a new and adorable family member apparently brought a shower of glee and enjoyment for the couple. Leo’s addition to the family made Chloe and her husband become parents from lovers.

The lovely boy always wakes up early either to paint rocks or bake with his mother in the kitchen. Chloe seems to love dressing up her little Leo with stylish clothes and outfits too. Brian also loves to spend time with his son to have a precious bonding time with each other. Leo’s never alone, and his parents always stick with him.

His happiness had probably touched the sky when he became an elder brother to his little brother, Luke. Chloe loves posting photos of her sons on her Instagram account. They two brothers aren’t practicing social distancing but playing with each other during this pandemic.

Therefore, Chloe Melas’ son, Leo DeSales Mazza, is living his best life with his parents and brother. We wish the family a lifetime of happiness too.

Chloe Melas Mazza’s son Luke Alessandro was born on July 5, 2019, in Manhattan, weighing in at 7 lbs. 8 oz. Cute Luke’s presence in the world doubled the small and lovely family’s happiness. The love birds were overjoyed to welcome their second son.

“It has not been an easy road to expand our family but it was worth the wait. We are also thrilled that Leo is now crowned Big Brother!”

Adorable Luke Alessandro must be getting lots of love and attention from his family members. Chloe never gets tired of clicking Luke’s photos and snaps. She often takes him out of the house to enjoy the beautiful world. Brian, having some quality time with little Luke, is one of the most adorable things you’d see.

So, Chloe and Brian have a beautiful life with their kids. In a nutshell, Chloe Melas is the mother of two sons with her husband, Brian Mazza.

Leo DeSales Mazza – Leo is a Latin word for ‘lion,’ and it refers to ‘brave people.’