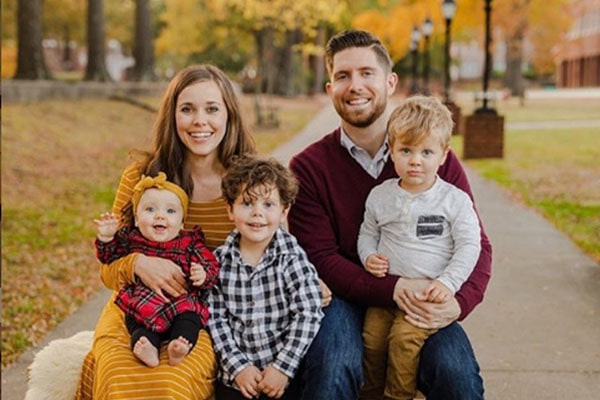 Jesse Seewald is the mother of three children with her husband, Ben Seewald. Image Source: jessaseewald/Instagram.

Jessa Seewald is an American television personality and has starred on the TLC reality series, 19 Kids and Counting. She is also a family member of the famous Duggar family. Well, as for her personal life, she married her husband, Ben Seewald, on Nov 1, 2014. Ben Seewald is an entrepreneur by profession.

Born in Nov 2015, Spurgeon Elliot is Jessa Sewald’s first child with her husband, Ben Seewald. According to PEOPLE, the family celebrated Spurgeon’s first birthday in classic Duggar style. The birthday was probably a memorable one for Spurgeon as he must have gotten tons of presents. Also, plenty of family members might have showered adorable Spurgeon with compliments.

He also has two cute siblings with whom he has great attachment. Going through Jessa Seewald’s Instagram, she loves posting photos and snaps of Spurgeon and his little brother and sister. He grows in kindness and compassion. Jessa also said that she sees more and more of his Daddy in him. Spurgeon loves being Mommy’s big helper, lending a hand whenever he can. He’s a fun and engaging son, and the family’s happiness lies within Jessa’s children. He’s tender with his little sister and loves to hold her and talk to her.

Spurgeon’s first birthday celebration was just the start of his beautiful life. Therefore, Spurgeon needs to tie his seatbelt since he’s probably going to be amazed by lots of surprises in the coming days.

Henry Wilberforce is Jessa Seewald and Ben Seewald’s second child and was born in Feb 2017. Henry’s addition in the family was good news; however, Jessa opened up about Henry’s struggles with speech delay. She revealed that Henry was having issues with his speech.

The couple had realized back when Henry was 18 months old, and he had not been communicating like his elder brother or other kids of his age. Nevertheless, Jessa Seewald updated about her child’s development progress, commenting ‘Henry is really catching up’ on Instagram. Perhaps Ben and Jessa are doing everything they can for cute Henry. So, it looks as though Jessa Seewald’s son, Henry is improving his speech delays day by day.

Similarly, he loves to play with his siblings; Henry and Spurgeon really get along and he loves their younger sister immensely. Hence, Henry Wilberforce is living a wonderful life with his parents and siblings.

Ivy Jane Seewald is the youngest member of the Seewald family. Jessa Seewald’s daughter was born on May 26, 2019, and has two elder brothers, Spurgeon Elliot and Henry Wilberforce Seewald. Little Ivy Jane is so cute and adorable that you cannot stop yourself saying ‘Awww! She’s so cute.’ Probably she steals the attention of people wherever she goes with her cuteness.

Since adorable Ivy Jane is the youngest family member, she must be getting tons of love from her parents as well as two brothers. Jessa also said that she had some happy tears after seeing her for the first time. As for dad, Ben Seewald, it was a very special moment for him when he held Ivy for the first time. Both Spurgeon and Henry were also over the moon to have a little angel in the family.

If you give a glance at Ben Seewald’s Instagram Profile, it’s jacked up with his kids’ photos. Just by looking at the photos, we can say that Ivy’s precious smile enlightens the entire fam. Therefore, Ivy Jane’s addition to the family was very special and it increased happiness and joys for everyone.

Spurgeon Elliot Seewald – Spurgeon is a name that refers to ‘little branch.’ Elliot derived from the Greek Elias, meaning ‘God on high; my God is Jehovah.’

Ivy Jane Seewald – Ivy is a  woody evergreen Eurasian climbing plant that represents fidelity. The name Jane means ‘Jehovah has been gracious’ and is an English baby name.