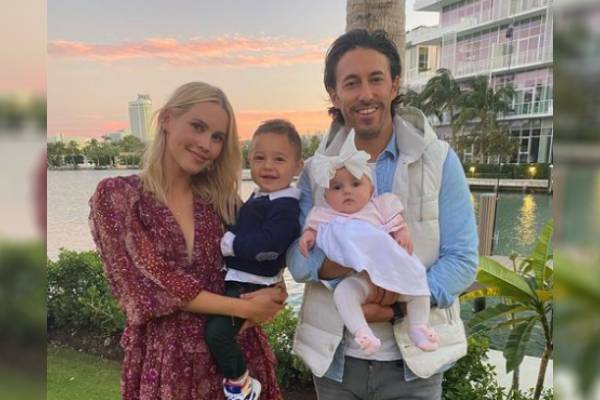 Together with her husband, Claire Holt has welcomed two kids together. Image Source: Claire Holt Instagram.

Claire Rhiannon Holt, Claire Holt is a talented actress who rose to fame after starring in the fantasy teen drama H2O: Just Add Water. In addition to that, she has starred in several other top-rated TV series and movies. Some of her notable works include Pretty Little Liars and The Vampire Diaries.

With all that said about her professional life, now let’s talk about Holt’s personal life. Well, she is a married woman with two kids. On top of that, she has been married twice. She first tied the knot with her long-time boyfriend, Matthew Kaplan. But the former couple divorced just after a year in 2017. The actress is now happily married to Andrew Joblon and has two adorable babies. Thus, let’s learn about Claire Holt’s children today.

The Vampire Diaries actress and her husband exchanged their vow on 18 August 2018. Just after two months, the actress announced her pregnancy on her Instagram page and also revealed that she was expecting a baby boy. Later on 28 March 2019, they welcomed the son, James Holt Joblon. Also, the actress suffered from a miscarriage back in March 2018. However, it was before her marriage to Andrew.

Afterward, on 12 September 2020, Claire and her husband gave birth to their second child, a daughter, Elle Holt Joblon. Both James and his little sister are lucky kids to be born to such loving parents.

Moreover, the Holt-Joblon siblings’ father is a founder and managing principal of Turnbridge Equities, a privately-held, SEC-registered investment and development firm with a demonstrated track record of success across a wide range of markets.

As the celebrity kids, James and his sister are already getting a lot of attention from the media. On top of that, their parents are raising them with all the love and care. Moreover, the talented actress has effortlessly balanced her demanding career and raising her two adorable kids. The children are still young, but they already have a good relationship with fashion. It must be because their mother is in the entertainment industry and is well-versed in the latest fashion.

The little ones frequently appear on their mother and father’s Instagram posts. Despite the busy schedule, the Holt-Joblon couple spends a lot of quality time with their lovely kids. Additionally, James takes good care of her sister.

Baby Elle, too seems to love her elder brother’s company. Hopefully, they will grow even closer in the coming days. Nonetheless, Claire’s precious babies look angelic. Furthermore, on the occasion of their three years wedding anniversary, the beautiful actress shared a picture together with her husband and said she wanted 8 more babies. So can the kids expect a new sibling in the upcoming days?

Claire First Struggled As A Mom

The talented actress opened up about her initial hardships when she first entered into parenthood. She said being a mom is definitely scary. She further added that she has been chasing her career so intensely, and she didn’t know herself as any other identity than an actress. But The Vampire Diaries star now thinks being a mom and finding the courage to veer off the trajectory is a real blessing.

As per Reading Eagle, in June 2021, the Holt-Joblon siblings’ mother decided to spend more time with them before returning back to her acting career. As her babies are still young, she must have wanted to make more memories with them. Claire Holt’s son just turned three in March 2022, so he must be preparing to go to Kindergarten. Likewise, his sister is two, and she is growing up with all the care from her dad and mom.

To conclude, both babies of the famous actress are growing up happily. In addition, they are enjoying their childhood to the fullest. We wish them a healthy life and a bright future ahead.

James is a name that is derived from the Hebrew word Jacob which means Supplanter.

On the other hand, Elle is a name of French origin that means She.