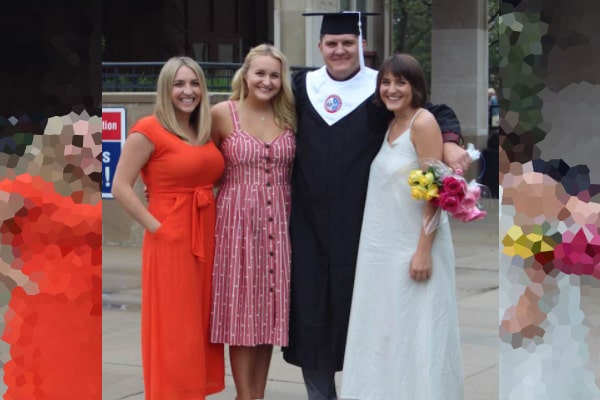 The NBA has seen several talents since its establishment in 1946. Among such excellent skills is coach Stan Van Gundy, current head coach for the New Orleans Pelicans. Previously working with the Detroit Pistons for four seasons, he is related to the former New York Knicks and Houston Rockers coach Jeff Van Gundy.

Besides achieving milestones and leaving a team during mid-season, Stan is a happy man with a beautiful wife and four kids with her. The marriage lasting over three decades, and counting is pretty impressive, and the couple serves inspiring parenthood. Therefore, let’s talk about Stan Van Gundy’s children and their whereabouts.

Aforementioned, the Pelicans head coach, Stan Van Gundy, is a proud father of four kids with a long-time partner, Kimberly Van Gundy. The pair have been married since 1988 and is still in love. Furthermore, throughout the marriage, the Van Gundy couple welcomed their first child, Shannon Van Gundy, in 1991.

Furthermore, there is very little about Stan Van Gundy’s children on the internet but a frequent face on his Twitter.

Additionally, Stan Van Gundy’s children make headlines for cutest reasons like adopting a dog. The Gundy family wanted to have a dog from an event called ‘Empty the Shelter.’ Furthermore, Stan Van Gundy’s daughter, Kelly, came across the event via Stan’s assistant and adopted a 1-year-old red-coated lab. The lab joined a dog and other cats in the Van Gundy’s house.

Oldest Daughter Is An Assistant Director

Father, a basketball coach, while daughter on a complete opposite profession, well, that’s how balance is created in the Van Gundy house.

Referring to Stan Van Gundy’s daughter, Shannon Van Gundy is an assistant director, identity, and diversity in the organization at Stephen M.Ross School of Business. She has been associate with the school since 2018 and has taken on various responsibilities.

Similarly, when asked about how she differed from her father, she joked she is more charming than her father. Well, can’t deny, but we do love the mustache-bearing man with unstoppable wit.

The only member who has chosen to remain secluded from all the media ruckus to date is Stan Van Gundy’s daughter, Alison Van Gundy.

However, Alison appears on her siblings’ social media every once in a while. Like her older sister, Alison is also a goal-seeker and has achieved remarkable success as an assistant program manager at the Branches, Inc.

Furthermore, the enthusiastic looking charmer, Alison Gundy has a degree in social sciences from Stetson University in 2019. She has voluntarily worked as a teaching assistant and student success coach, and many more throughout her career-building.

Well, Alison is doing a great time as a 23-year-old. Therefore, let’s hope to see Stan Van Gundy’s daughter rise with the time, who is an absolute beauty and shares an excellent bond with siblings.

Stan would be a #girldad if he didn’t welcome his only son, Michael Van Gundy, in 1994.

Alike sister, Shannon, Stan Gundy’s son, Michael Gundy, seems to be a University Graduate. He went to the University of Detroit Mercy and studied at Seminole State College of Florida. Moreover, Michael’s graduation picture is all over the proud parents’ social media, including Stan Van Gundy’s Twitter’s cover photo.

Unfortunately, Michael prefers a quiet life and hence publishes only a few parts of his life. However, we do know that Gundy’s son is politically aware and pretty close to his family. Moreover, Michael Van Gundy’s Facebook profile picture is with his sister with a reminder filter that says ‘Vote.’ So, further explanations on sibling bond might sound irrelevant at this moment.

Aforementioned, all four siblings are an avid animal lover, but Kelly Van Gundy seems to be excited, particularly for dogs. Not saying that she’s not a big fan of cats whatsoever. Talk about having six cats and not loving them. However, she was equally excited to welcome a new labrador back in 2017, when papa Gundy was still working for the Pistons.

Additionally, Stan’s youngest daughter, Kelly, is comparatively active on social media. Via her Facebook, we got to know that she’s attending Stetson University since 2016.

Kelly cast her vote for the first time this year, for a candidate her father, Stan had endorsed, the President-elect, Joe Biden.

All four siblings are very close to one another and share special moments. Honestly, the close ties of the Van Gundy family are pretty desirable. Therefore, let’s hope the family charm remains intact for as long as possible.

The name Michael means ‘Who is like God?’ and has Hebrew origin. Similarly, Shannon is an Irish name, which means ‘wise river.”

Likewise, Alison says Of the nobility, which has an English origin. Finally, Kelly means “descendant of Ceallach” and “warrior,” which also has Irish heritage.