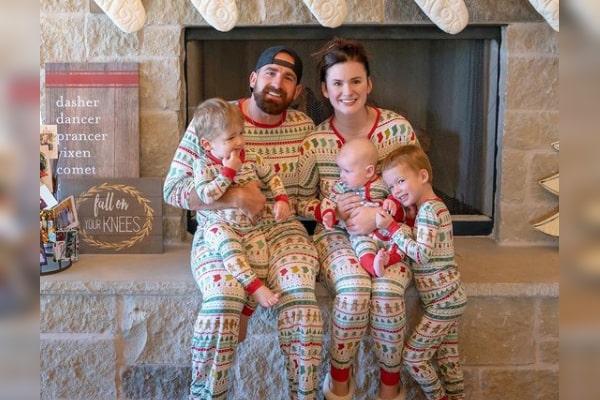 Tyler Toney is well known as an American YouTube actor, producer. He is among the five co-founders of magnificently admired YouTube Channel Dude Perfect, which has over 55.5 million subscribers. The YouTube Channel is best known for sports and entertainment content. Toney has also created series like The Dude Perfect Show, Bad Jokes, and Dude Perfect Trick Shots: Untold Stories with his other partners.

The energetic and hard-working co-organizer, Tyler Toney, is a married man enjoying his life with long-time partner Bethany Toney and their three kids. The lovers got hitched on October 21st, 2011, and the lovely couple welcomed three sons in their decade-long marriage. Let’s find out about Toney’s children and their whereabouts.

Barrett Nathan Toney, Eldest One In The Family

Tyler and his wife welcomed their first child, Barrett Nathan Toney, on February 11th, 2017, just after their fifth wedding anniversary. Aforementioned, Barrett’s father Tyler Toney got engaged to Bethany Briscoe, on October 21st, 2011. The partners were said to have been engaged for at least a few years before getting married. The marriage ceremony was held only in the attendance of few close companions and family members. Toney and his better half went for their honeymoon to Sandals Grande Antigua Resort & Spa in the Caribbean country, Antigua, and Barbuda.

The excellent news of the pregnancy was shared by the new parents-to-be exclaiming how excited they were to be father and mother. Tyler Toney’s wife, Bethany, also revealed that she had two miscarriages through her Instagram post. Mrs. Toney also mentioned the emotion that the pair went through during the harsh times.

Second Child Of The Power Couple

Two years after Barrett’s birth, the Toney pair gave birth to their second child, Colton James Toney, on June 5th, 2019, at 11:16 AM. The duo had shared about expecting their second baby through their social media handle as well.

After the arrival of Tyler Toney’s son Colton Toney, the sweet couple shared their happiness, promising to love the kids fiercely. The newborn baby was also welcomed by his grandfathers and was taken to the new house, and was properly nurtured there in Dallas, Texas. The charming boy got his first haircut when he was seven months old. After some months of Colton’s birth, Bethany overcame kidney stones where she expressed the pain more dreadful than the labor.

As stated earlier, the arrival of a new member added much more laughter and cheerfulness to the family.

Barrett And Colton Are Big Brothers

The YouTuber’s family count went from four to five when Bethany gave birth to their third son Rhett Silas Toney. Tyler Toney’s son Rhett was welcomed on June 7th, 2020, at 1:25 PM. The newborn’s parents explained the excitement and craziness of adding a new member to the family through a post. After Rhett’s birth, Barrett and Colton became big brothers.

Nevertheless, Tyler Toney’s sons are growing up well. Their parents are not only giving them a comfortable lifestyle but also good manners. The kids are frequently taken for the visit so that they can be familiar with and enjoy the outside environment too.

The prominent YouTuber and his better half, Bethany, are found to share a special relationship. The lovers are blessed with three offspring to date and are living crazy and memorable moments together. There is no uncertainty for their love toward each other and their offsprings. Although Tyler and his wife are not active on Twitter, Tyler Toney’s sons have made a persistent appearance on their Instagram pages.

Both Tyler and Bethany don’t hesitate to flaunt the family news on social media. The family is together, having quality time and sharing love and affection among one another. Tony and his wife, Bethany, shared their vacation photos on their social media sites. We can also see the love and care between the three of Toney’s sons.

Tyler Toney’s family seems to be living a prosperous life without the rumors being circulated about them. All of the three kids seem to be enjoying one another’s presence creating wonderful moments in their life. The duo also seems inseparable from each other, which points out their rare chance of separation. Let’s hope we get to know more about the Toney family in the coming days.