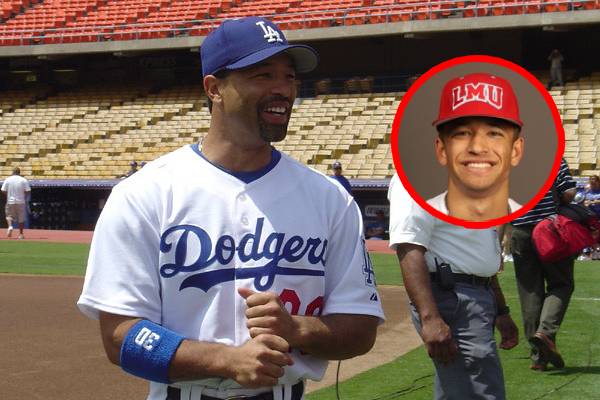 Dave Roberts is a Japanese-American baseball manager and a former baseball player who played as an outfielder. Born David Ray Roberts, he played for five Major League Baseball teams during his playing years. Since 2016, he has been managing the Los Angeles Dodgers of the MLB.

Apart from his successful baseball career, Roberts also enjoys a satisfying life with his lovely family of four. The family consists of him, his beloved wife, his eldest son, and his youngest daughter.

Many of Roberts’ fans are curious about one of his kids, having seen him on the diamond field. So, today, let’s know more about Dave Roberts’ son, Cole Roberts, and their relationship.

Roberts got married to his high school girlfriend, Tricia Roberts, and welcomed two children with her. The eldest child of the couple is a son named Cole Roberts. He was born on October 9, 2000, in Cardiff-by-the-Sea, California.

Cole has a younger sister named Emmerson Roberts, who is four years younger than him. She also plays tennis at her high school. Dave Roberts’ daughter made headlines when she sang the national anthem in one of the LA Dodgers games in 2017. The father-daughter duo has a strong bond, and Dave always tries to be present in his little girl’s life.

Dave’s eldest son attended Santa Fe Christian High School in California and is currently a junior at the Loyola Marymount University. Cole isn’t much active on social media and seems to enjoy being out of any spotlight. It appears that he is a person of privacy.

Cole, following in his father’s footsteps, also plays baseball. It is hard to know precisely when he started to play baseball, but it isn’t hard to guess that his dad must have influenced him.

Nevertheless, we can guess that Cole might have been playing the sport ever since he was little under the guidance of his professional dad. However, we do know that he officially started playing baseball at Santa Fe Christian High School.

Currently, Dave Roberts’ son plays as an infielder for Loyola Marymount University and has shown incredible results. He plays as a Second Baseman, Shortstop, and Third Baseman in his team.

In June 2019, the talented shortstop also played for the Portland Pickles, a collegiate baseball team that plays in the South Division of the West Coast League. The team he played for finished 4th overall out of twelve teams in the season. Additionally, in June of the same year, Cole was drafted by the San Diego Padres in the 38th round of the MLB Amateur Draft.

The father-son relationship between Dave and Cole Roberts seems to be great. Dave at times attends his son’s games during his matches.

Cole Roberts’ father was kept from managing the Dodgers during the MLB lockout. During that time, Dave supported him as a full-time baseball dad. In a past interview, the baseball manager spoke briefly about Cole and mentioned how he is “very witty and somewhat reserved.” He added his boy also has humility and fire.

Likewise, Cole has mentioned his old man’s influence on him and his baseball career. However, he also talked about his dad letting him do his own thing, which gives the impression of Dave being a friend-like figure.

According to the baseballer, he tries to go on his own path but still tries to take elements of his dad’s games into his own. It is evident just how much respect the young baseball player has for his dad.

Considering the Roberts family’s less social media interaction, it is hard to say how they enjoy their time together. Nonetheless, we can see that the bond between the father-son duo is stronger than anything, as they have the same interest and career in baseball.

Although Cole is currently known for being Dave Roberts’ son, we await the day that he will be known for his exceptional skills as a spectacular baseball player. We wish for his healthy and successful baseball career.

The name Cole is of Greek origin which means victorious people.