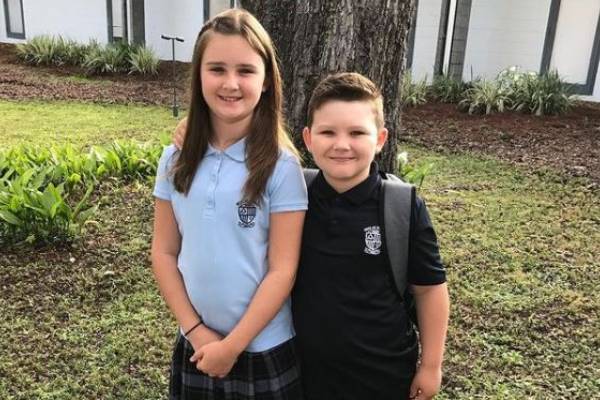 David Ross is a well-known name in the baseball world. He is the manager of the Chicago Cubs of Major League Baseball and used to play baseball previously. He has been involved in his profession for more decades now and has gained enormous fame.

David has been in the limelight for years, and fans are curious to learn about his personal life, mainly his fatherhood experience. Thus, stay with us till the end to know more about David Ross’ kids, Landri Ross and Cole Ross, and what they are doing these days.

David Ross was previously married to Hyla Ross. The couple that first met in the fall of 2001 got hitched in February 2005. They were married for 15 years, and in all those years of togetherness, the couple welcomed three kids, including Landri Ross.

Moreover, two years after the birth of Landri, the baseball manager’s son, Cole Ross, was born on May 1, 2009. Both children of the former pair were born without any complications.

Despite the fame and popularity, the couple has not revealed much information about their kids.

Have A Younger Sister

In their more than a decade of togetherness, David and his ex-spouse, Hyla, shared three beautiful kids, one son, and two daughters. In addition to Landri and Cole, the former duo welcomed their youngest kid, Harper Lynn Ross, on the 26th of August, 2015.

Unlike the birth of Landri and Cole, David Ross’ former wife had complications during her third pregnancy. David’s baby girl was delivered two months before the actual due date. Pregnant Hyla was rushed to the intensive care unit of a hospital in Tallahassee for an emergency C-section after she suffered a partial abruption.

In an article published in Chicago Tribune, Landri and Cole’s mom mentioned that she had seen their dad putting on his shoes and scrubs, and he was already crying. In addition, the article noted that their mom could have bled to death because of the abruption. This could have resulted in the deprivation of oxygen and necessary nutrients to Landri and Cole’s baby sister.

Fortunately, Cole and Landri’s sibling, Harper, was delivered safely because of the successful C-section. They both love their sister. David Ross’ children are having a great time growing up together.

Cole Ross Wants To Be A Catcher Like His Dad

David Ross’ son, Cole, also plays baseball. Due to his father’s influence, a former baseball catcher, Cole’s interest in baseball might have increased. According to MLB, Cole wants to be a catcher like his dad. Furthermore, the article mentioned that he calls the posture in which he plays a “comfy stance.”

Moreover, Cole’s dad mentioned that the young boy came to him after a game in May 2016 and said he was trying to impress David. To which Ross replied that his son being himself impresses him.

Moreover, as he has already competed in different matches, Cole might have won some of them. So, young Cole will probably become a successful baseball catcher like his dad.

In March 2014, David Ross’s son, Cole was rushed to a hospital emergency room when he could not breathe. While talking to ESPN, David mentioned that his son’s mouth had turned blue and that scared him as he could see other people panicking and rushing around. At that time, Cole’s mom was calm as she is a pediatric ICU nurse.

Later, the doctor revealed that Cole is asthmatic and that it was his first asthma attack. Cole’s dad mentioned that him being asthmatic made sense as his son used to complain that his leg hurt while walking and he used to be tired frequently.

Cole is under medication now and the doctor even gave him an inhaler.

While Cole is involved in the baseball game, David Ross’ daughter, Landri Ross, is a volleyball player. However, not much is known about her volleyball journey. Who knows Landri, might become a successful volleyball player in the future.

Furthermore, Ross’ kids attend the Maclay School. But, it has not been revealed what grade they study in now.

After his divorce from his former wife Hyla in early 2020, his kids stayed with his ex-wife. In an interview, David mentioned that he facetimes with his children every night. The kids share about their day and everything else, whether the information is silly or serious. The divorced couple is raising their kids with mutual understanding.

Landri Ross and Cole Ross seem to be doing excellent in their lives and are living a great life with their dad, mom, and sister. Let’s hope that we get to know more about David Ross’ children in the future.