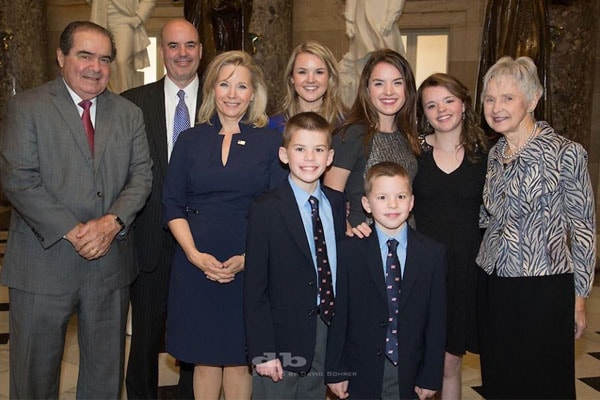 Dick Cheney’s daughter, Liz Cheney, is the eldest daughter of the then-Vice President Dick Cheney and former Second Lady Lynne Cheney. Liz is married to her husband, Philip Perry, with whom she has five children; daughters Kate Perry, Elizabeth Perry, and Grace Perry, and sons Philip Perry and Richard Perry.

Liz Cheney’s daughter Kate Perry is the firstborn and the eldest among the children. Born in 1994, a year after her parent’s marriage, Katherine is 25 now and works as a Foreign policy correspondent at the Office of Senator Marco Rubio, United States Senate.

Dick Cheney’s granddaughter, Elizabeth Perry, was born three years later in 1997. Elizabeth is currently studying at Colorado College, the same institute from where her parents once graduated.

In 2000, the Cheney household was blessed with yet another girl, Grace Perry. Liz Cheney’s daughter Grace is 22 now.

In 2013, The Seattle Times reported that Dick Cheney’s daughter, Liz Cheney, had enrolled her school-age children to Jackson Hole schools. Liz Cheney might be a public figure, but she has managed to keep her children away from the media’s attention. Liz’s children are frequently seen with her in campaigns and pictures; regardless, the mass is not much acquainted with their personal lives.

It is well-regarded that former vice president Dick Cheney’s daughter, Liz Cheney has been an outspoken critic of the former leader of the US. Thus, considered one of the most important Republic politicians in the country, Liz has been freed from her role after she opposed the conspiracy claims of the former president, Donald Trump.

The highest-ranking Republican woman in Congress supported moves to impeach Mr. Turmp and rejected his claims that the election had been ‘stolen.’ Furthermore, she has always been a vocal critic of the former president and remained adamant about her criticism encouraging her party to speak the truth.

Moreover, the mother of five, Liz Cheney was ousted from her position after her anti-Trump broadside in a Wahington Post op-ed. After its publication, Kevin McCarthy, Republican whip, Steve Scalise began taking steps to fire Cheney. Moreover, he further told a Fox News presenter, “I’ve had it with her.” Mr. McCarthy previously advised colleagues against removing her.

Without wasting time, Donald Trump released a statement describing Liz as a ‘bitter person.” He further added that Ms. Cheney “has no personality or anything good having to do with politics or our country.”

Katherine:  Katherine is a baby name that means  “Pure and Clear”.

Elizabeth: Derived from the Greek, Elizabeth means “My God Is An Oath”.