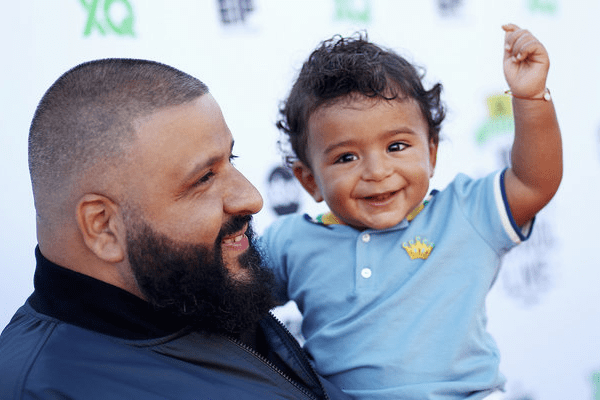 If you do not know then, Asahd is the executive producer of Grateful(2017), DJ Khaled’s 10th studio album Since his birth in 23rd of October, 2016, Ashad has been attending the red carpet of different prestigious events.

Having a millionaire father and being a young millionaire himself, Asahd makes his public appearances on expensive Gucci Suits, Jordan Sneakers, and million dollar diamond watches.

The baby who isn’t even two years is living a life what we all could dream of. Here’s a brief insight into the luxurious life of DJ Khaled’s son Asahd Tuck Khaled.

Asahd has partied with people like Ebro of Hot 97’s. Most of us have never seen Rihanna live, but the Asahd has already been able to get a kiss from the wild one.

Maybe it is all thanks to his producer daddy’s associates and his cuteness. Asahd has also hung out with Illmatic rap icon Nas.

Big Sean, Travis Scott, Justin Bieber, are some of the other celebrity singers with whom Asahd has met, or let’s say they are lucky enough to meet Asahd.

Other top artists like Alicia Keys and Swizz Beatz have already invested in Asahd’s musical production. They gifted him a piano, perfect for his size.

People must be wondering, isn’t Asahd too small to ride a car? Well, YES! He might be too young to drive a car, but that doesn’t stop him.

The young executive producer Asahd has his own, custom-made electric miniature car. Not just any model but it surely is every man’s dream.

Asahd has got cars for his comfort from Ferrari, Mercedes, and Roll’s Royce. Well, that is obvious when your father is DJ Khaled. Before cars, Asahd used to stroll around in a Fendi Monster Inglesina that costs around $1,760.

It hasn’t been long since Asahd took his first baby steps on his own. But the astonishing fact is, he already has a massive collection of sneakers. He has got sneakers from some of the top brands like Jordan, Yeezy, and Gucci.

Like Asahd, his father also has an eye for expensive sneakers. He has a giant closet filled with designer sneakers. Plus Khaled has got some saved for his son when he grows up.

If you want to see the lavish lifestyle of Khaled’s son Asahd Tuck Khaled you can check out his Instagram profile. At the very young age, Ashad has got over 1.9 million followers.

Even on his first birthday, DJ Khaled presented his son with a $100,000 Swiss Watch. And the birthday party was hosted by none other than one of the biggest name in the rap industry P. Diddy himself.

The name Asahd is derived from Asad an Arabic baby name. It means lion or fortunate.

As for the name Tuck, it is a masculine name and it is of patronymic origin.