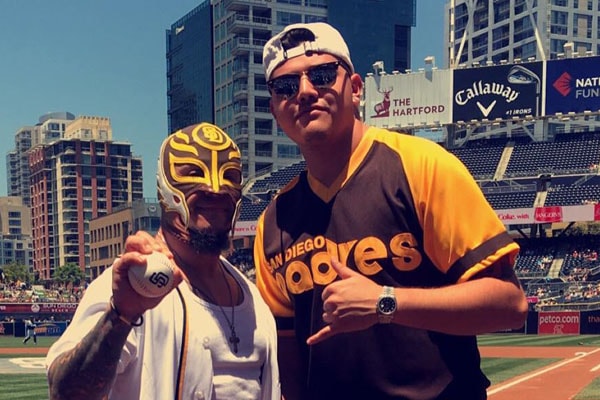 Dominic is the eldest child and only son of Rey Mysterio. Image source: Dominic Gutierrez/Instagram.

The veteran WWE superstar and former World Champion, Rey Mysterio’s son, Dominic Gutierrez is the eldest son of the family. The proud parents of 21-year-old Dominic, Mysterio and his wife Angie also have a young baby girl Aalyah together.

The professional wrestler, Rey Mysterio and his lovely wife, Angie Gutierrez, dated for a couple of years before deciding to exchange vows in the year 1996. The adorable pair and proud parents of two wonderful kids- Dominic Gutierrez and Aalyah Gutierrez.

Wrestler’s Son Steps Into The Ring

The 21-year-old son of former WWW Champion Rey Mysterio has foretaken his famous father’s footsteps and begun training in his blossoming pro wrestling career. Father Mysterio confirmed that his son had started a 3-month training camp at Lance Storm’s pro-wrestling academy in an Instagram post. Furthermore, the legendary luchador’s son, Dominic can attract a great deal of attention owing to him potentially following the steps of Mysterio en route to achieving pro-wrestling greatness.

The young son of the famous professional wrestler always had a plan of embarking on a career in professional wrestling. The news of father Mysterio training Dominic and helping him set foot in the wrestling industry circulated over the internet. However, the father and the son have been relatively quiet about the news. Besides that, Rey Mysterio’s son, Dominic has previously appeared on WWE programming in a feud against late-great Eddie Gurrero. Furthermore, the pro-wrestling world is now rife with talks of Mysterio himself signing a new 2-year deal with the WWE.

Only Son of Wrestler Father

The young Dominic is the eldest child and only son of parents, Rey Mysterio and Angie Gutierrez. Rey Mysterio Jr. shares a common interest of wrestling with his legendary wrestler father. Likewise, the talented and strong Mysterio has not left any stones unturned to train, and create a platform for his son in the professional wrestling industry.

The 21-year-old Dominic is the elder brother of young and stunning sister, Aalyah Gutierrez. The siblings share a strong and intimate relationship, and the bonding between the brother and sister is admirable.

The baby boy name Dominic is a common name amongst Roman Catholics and other Latin-Romans. The beautiful name was originally from the late Roman-Italic name “Dominicus” which has a meaning: “Lordly”, Belonging to God”, or “of the Master”.