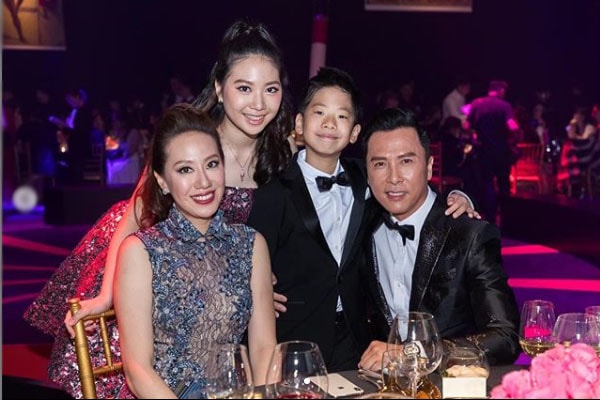 The Hong Kong actor, Donnie Yen, is a proud father of three kids. His children are named Man-Zeok Yen, Jasmine Yen, and James Yen. Donnie had his three children from two different baby mamas. The actor is currently married to a famous Honk Kong model, Cissy Wang. The adorable couple tied the wedding knot back in 2003 and are together ever since.

The love birds of Donnie Yen and Cissy Wang share two children together; a daughter Jasmine, and a son James. Donnie was previously married to an advertising executive named Leung Zing Ci. The former pair share a child together that is Man-Zeok.

Donnie Yen’s son Man-Zeok Yen was born back in 1995. The 24-year-old Jeff is the eldest child of the famous actor. As mentioned earlier, Jeff is the Ip Man star’s son from his first marriage to advertising executive Leung Zing Ci.

In the past, the Hongkong action star remained clearly low-key about his eldest offspring. However, things took a turn on Father’s Day in 2018 as Donnie posted a photo of his three kids together. It was almost after two decades, and his brood of three had rarely been photographed together.

Jeff’s parents wedded in the United States back in 1992, but the exes split less than a year later. After the divorce, Leung discovered that she was pregnant with Donnie’s child. Then, the court granted her custody of Jeff.

Some reports claim that Jeff was hospitalized for pneumothorax and underwent a lung operation in 2013. Fortunately, the matter has now stabilized, and he is living a normal and healthy life. And he also has two half-siblings from his father’s second marriage.

Donnie Yen’s Daughter Is A Dancer

There is, without a doubt, that Jasmine Yen is truly a fabulous dancer. Being a graceful dancer, Donnie’s kid also seems to be a model. The well-defined face truly reflects her natural beauty. The versatile daughter of Donnie enjoys her weekends traveling to beautiful places. Not only that, but she even enjoys surfing and skiing.

As of now, Jasmine seems to be living her life to the fullest and is quite satisfied with her life. The multitalented Jasmine clearly seems to have a bright future ahead.

Both Of Donnie Yen’s Children Are Active On Instagram

In spite of being slightly young to join the world of social media, both of the junior children of Donnie are active on their Instagram handle. The youngest child of Donnie, James Yen, has 3.1K followers on his Instagram account as of 2019. James loves to travel around the world, along with his lovely family of four. James was born in 2007 and seems very happy with his life.

Truly, Yen’s family is quite adorable and shares a very strong bond with each other. The youngest son seems bonded with each member of his family. Also, the family has two pet dogs named Peanut and Toffee.

Man-Zeok Yen: Man-Zeok is a universal name of Slavic origin, meaning “high-lander, or someone who lives in the mountains.”

Jasmine Yen: Jasmine is a female given name of Persian origin. The beautiful name provides the meaning of “the gift from God.”