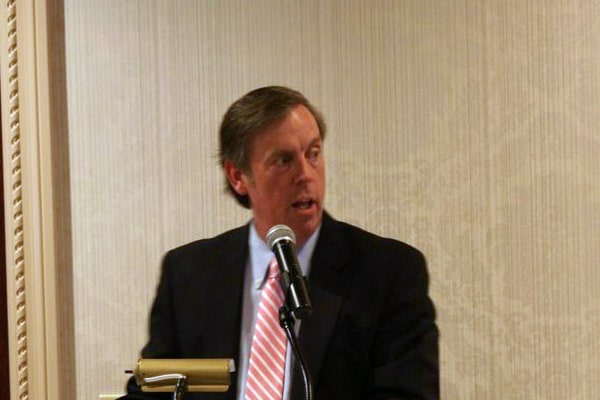 Doris Burke is one of the celebrated basketball commentators on ESPN for over a decade. Burke has covered several significant events during her career as a successful sports analyst for ESPN, ABC, and MSG. Moreover, she also used to play basketball during her high school days under the name Doris Sable. The All-Big East selection three times, Doris is in the Providence College Athletics Hall of Fame, and her jersey has been retired.

Talking about the personal life of the reporter Doris Burke, she was once in a marital relationship for some years. Doris was married to Gregg Burke, former deputy director of athletics at the University of Rhode Island. And Doris Burke’s ex-husband is a head golf coach too.

Here, know some more details on the ex-husband of Doris Burke.

The ex-husband of Doris, Gregg Burke, is currently serving in the University of Rhode Island as the head golf coach. It’s Burke’s sixteenth year at the URI in 2020 and tenth as the Rhody golf team’s head golf coach. Before being URI’s first-ever full-time golf coach from 2010, Gregg spent 2004 to 2010 as deputy director of athletics in Rhode Island.

Gregg joined the URI as Deputy Director of Athletics in 2004 and provided service as a department’s chief operating officer. He mainly supervised the men’s and women’s basketball, men’s golf, and external relations and operations during his tenure.

To date, Burke has guided the URI Rams to numerous championships winning various awards and top rankings. In Gregg’s first year at the helm, the URI Rams became the Century Intercollegiate Golf Championship winner and achieved the second rank at the Connecticut Cup.  His golfers also took part in various other championships such as the Wildcat Invitational, the New England Division I Championship, and the Met Association Stroke Play Championship.

Had His Consulting Firm

Before joining the University of Rhode Island, Gregg Burke had founded his consulting firm GB Productions in 2001. His firm included event management, client work in golf, media relations, fundraising, and business development. However, after being employed in URI, Gregg seems to have discontinued his firm.

In 1999, Doris Burke’s ex-husband teamed up with nationally respected basketball administrators in launching the International Basketball League. After being appointed as a Vice-President of the League, Burke played an essential role in flourishing the business plan and public relations strategies. He also directed the special events, corporate sales, public relations, licensed and merchandised staff.

Besides, Gregg Burke also worked as an associate athletic director in charge of administrative and external relations efforts at Providence College. Later he did his Masters in Education from the same college in 1998.

For Gregg’s dedication and commitment to athletics, he has been honored by numerous organizations. For contributing to sport in Rhode Island, Burke received the 2002 Amby Smith Award. Similarly, for contribution to college football, he got the 2002 Scoop Hudgins Lifetime Achievement Award. Likewise, for Providence College Basketball, Gregg was awarded the 1999 Providence College Sixth Man Award.

Moreover, back in 1994, Gregg Burke also got the first-ever Lester Jordan Award for service to the Academic All-America Program and the student-athlete ideal.

Gregg Burke took the wedding vows with the sports commentator Doris Burke in 1989 after a short period of dating. However, due to various unforeseen circumstances, the then-couple parted their ways away and eventually divorced.

The estranged couple, Doris and Gregg, have two gorgeous children together. While they were still husband-wife, Doris gave birth to their first child, Sarah Burke, in 1992. Their daughter is a law school graduate and working as a judicial law clerk for Honorable Gary S. Glazer in Philadelphia.

Similarly, Gregg is a father to another child, a son named Matthew Burke, with ex-wife Doris Burke. Doris and Gregg welcomed their son, Matthew, in 1994. Usually, Gregg Burke’s son does not show himself much in the media platforms. However, according to Gregg, Matthew is a golf player and is focused on making himself a pro at it.

Gregg has a great bonding with both of his kids. Though he does not share many photos of him on his social media pages, he never hesitates when it comes to his kids.

His Ex-wife Shades Him During ESPN Broadcast

Gregg Burke’s ex-wife, Doris, a couple of weeks ago, was an ESPN commentator for the game between Memphis Grizzlies and New Orleans Pelicans. While Ja Morant taking a shot from Lonzo Ball replayed, Doris said something to announcer Mark Jones. It made the internet go crazy.

Later, Doris called Gregg for an apology. However, Gregg was a good sport about the whole thing. As a reply, he said that he has the utmost respect for his ex-wife. Gregg added Doris is a great broadcaster and a better mom.

The whole incident shows that the distanced partners, Gregg and Doris, still are in good terms. And both are doing great in their respective fields.