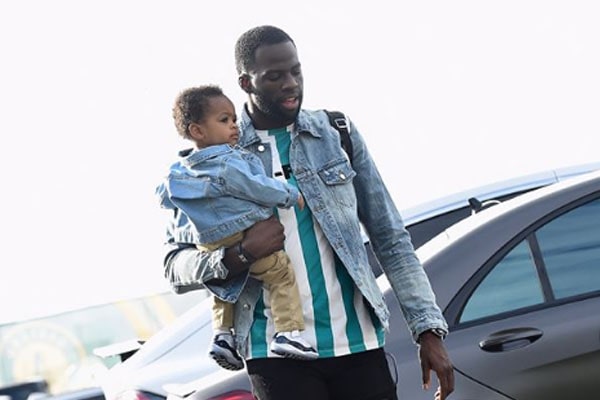 Draymond Green‘s son with his baby mama and then-girlfriend, Jelissa Hardy, is Draymond Jamal Green and was born on Dec 22, 2016. Draymond’s dad is an American professional basketball player for the Golden State Warriors in the NBA. As for his mom, she seems to be living a life away from the spotlight and media.

Draymond Jamal Green Jr. has an elder sister named Kyla Green. He also has a half-sister from his mom’s side. Draymond’s dad is engaged to the American actress and TV personality, Hazel Renee. Hazle has a daughter, Olive Jay from her previous relationship who is Draymond Jr.’s step-sister. So, coming back to Draymond Jr., let’s not waste any time and know more about Draymond Green’s son.

Draymond Green Is Taking Good Care Of His Son

Well, after Draymond Green broke up with his ex-girlfriend, Jelissa, he certainly took the responsibility to take care of his son. Draymond Jr. is living with his dad, dad’s fiancée, and his half-sister. Going through Draymond Green’s Instagram profile, he frequently posts photos of his son, all happy and smiling.

The Warriors star and his son came together at the interview after Warriors’ season-opening win in Oct 2018. Draymond Jr. sat along with his dad for the whole time. After the interview finished, adorable Draymond Jr. was shy to speak in front of the crowd. However, he ended the interview with a ‘peace out’ which is the cutest thing you’d see for sure.

Not only that but also Draymond’s future-wife, Hazel Renee, is taking care of his kids. Well, she is probably turning out to be a great mother to Draymond Jr. and Kyla. Hazel’s love for Draymond Jr. must be so immense that he probably cannot see the difference between her and his own mother.

Maybe Draymond Jr.’s mom, Jelissa Hardy comes to visit her son frequently to have bonding time with him.

Draymond Jr. Adopted Some Of His Dad’s Mannerisms

Draymond Green’s son didn’t take long to copy his dad’s manners and started ‘shooting and flopping.’ The Warriors star noticed that his young son was picking up his habits. So, he had tone things down and be a good example to his children and make them know about the right thing.

Draymond Green said that he played on his little hoop, and then he would stomp around. He realized how good kids are at such a young age to impersonate other people. He also stated, “I want to make sure I’m setting a good example.” It looks like Draymond Jr. has now stopped such a naughty habit.

Enjoying A Lavish And Splendid Life

According to Celebrity Net Worth, Draymond Green has a staggering net worth of $20 million and a yearly salary of $16.4 million. So, Draymond Jr. is probably enjoying a comfortable life. His dad must be doing everything to see that priceless smile on his face. Draymond never forgets to wish his son on his birthdays as well.

Therefore, Draymond Jr. must be having a splendid and lush life that others keep on day-dreaming. So, in all, he is definitely enjoying life with his family happily.

According to the English origin, Draymond refers to the ‘Bible.’ Similarly, Jamal is an Arabic name, meaning ‘beauty.’