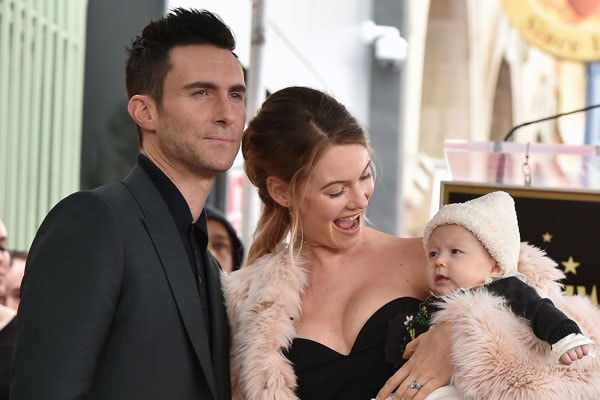 On the 21st of September, 2016 Adam Levine, and wife Behati Prinsloo welcomed their first child together, a daughter named Dusty Rose Levine. The lead singer of Maroon 5, Adam Levine is a father of two lovely daughters as his wife Behati gave birth to their second daughter, Gio Grace Levine on the 15th of February, 2018.

After two years of dating, Adam exchanged vows with Prinsloo in 2014. The couple kept updating their fans by uploading photos of pre and post-Prinsloo’s baby bumps on Instagram.

Adam Levine’s daughter Dusty Rose Levine is the epitome of adorableness. Like the song of Maroon 5 goes “She will be loved,” Dusty Rose will surely be loved, not just by her parents but also by people around her. Adam Levine’s wife Behati Prinsloo uploaded a photo of the father-daughter duo sharing a lovely moment.

The “Moves like Jagger” singer Adam surely has got an adorable family. Also, Adam Levine’s daughter Dusty looked fluffy when Adam received a star on the Hollywood Walk of Fame in Los Angeles. It was the little Dusty’s public debut and going through the photos it seems like she really loved it.

A couple of months ago Maroon 5 uploaded a music video for their song “Girls Like You” featuring the “Bodak Yellow” singer Cardi B. Cardi B is also a mother of one. We assume Cardi B’s daughter Kulture Kiari Cephus is as pretty as her mother as her face has not been shown to the public eyes yet.

The music video was studded with star celebrities including Ellen DeGeneres, Gal Gadot, Jenifer Lopez and others. Plus at the end of the music video, there was a surprise appearance of Adam Levine’s daughter Dusty Rose along with his wife, Prinsloo.