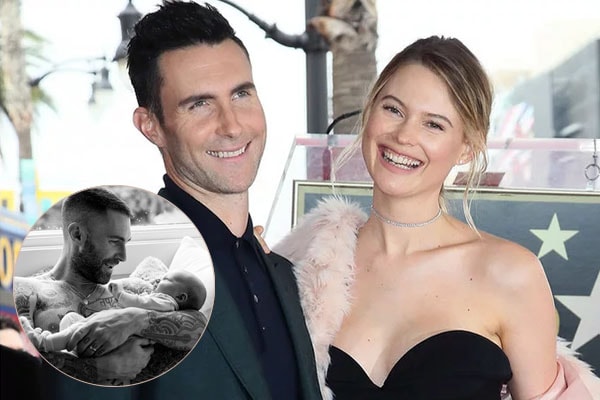 Maroon 5’s lead Adam Levine and his wife Behati Prinsloo welcomed their second daughter Gio Grace Levine. The cute baby of Adam Levine arrived into the world on the 15th of February 2018, a day after Valentine’s day. Maybe Adam Levine’s wife Behati’s gift to the singer came a day late.

Adam Levine’s elder daughter Dusty Rose Levine is also incredibly adorable. Adam and his wife Behati seemed so delighted to have a second baby daughter. Who knows if the couple is planning for yet another baby?

Adam Levine’s Elder Daughter is Obsessed With his Younger Daughter

When Adam came to the Ellen DeGeneres show, he stated how his daughter Dusty Rose is all over her younger sister Gio. He added when Dusty wakes up in the morning the first thing she does is going into Gio’s room and calling out her name repeatedly. That is an “Aww” moment, isn’t it?

Adam admits that his daughter Dusty is a little bit rough to the younger Gio and for instance, Dusty herself is a small baby. Plus it is the same case with Adam Levine’s wife, Behati. She is also obsessed with her husband but in a good way. Behati uploaded the very first photo revealing the young daughter of  Adam Levine. Adam had held his kid, and we can see how the father-daughter duo was having a lovely time gracefully staring into one another’s eyes.

It wasn’t the first photo of Adam Levine’s youngest daughter. Behati had uploaded a picture of the young Gio Grace Levine after her birth, but that only revealed her foot. The caption stated that Gio had got toes like her father, Adam.

Keeping Gio Away From Limelight

As the younger daughter of Adam Levine is just too adorable, he has decided to hide her for a while. Adam along with his wife wants to keep both of their daughters away from the media limelight. Speaking to Ellen, Adam well stated that he wants to have a band of his children and will let his wife Behati decide the timing of their next child.

The name ‘Gio’ originated from the word “Giovanni.” Giovanni is the Italian cognate of John, which means God is gracious. And as we all know, ‘Grace’ has got many meanings like beauty, dignity, ease, and others. So Adam probably wants the god to become gracefully generous towards his daughter Gio Grace Levine.