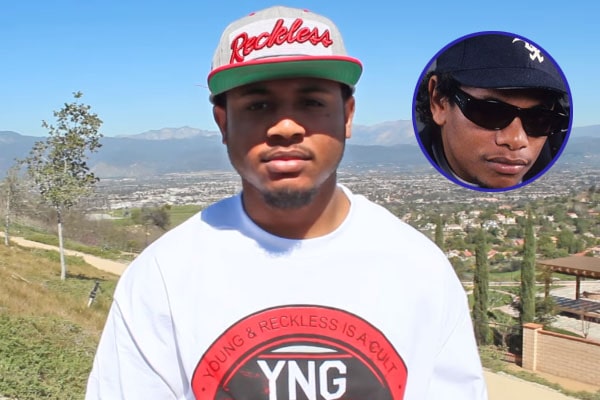 Eazy-E‘s son Marquise Wright aka Yung Eazy was born on February 14, 1990. Along Yung, Eazy-E has eleven children from eight different baby mamas. Yung followed his father’s footsteps and became a rapper. More to that, he also has his own YouTube channel named IAmYungEazy.

Speaking of his father Eazy-E, he was a professional rapper, record producer, and entrepreneur. But unfortunately, the rapper died on March 26, 1995. The cause of his death was HIV/ AIDs. However, his son Marquise claimed that his dad didn’t die but was murdered. So, let’s see what Yung told about his father’s death.

In the caption, Yung even pointed out his father’s role in the Straight Outta Compton film as evidence of the foul play involved in his dad’s death. Eazy-E didn’t get sick until after the studio incident with Suge. He also pointed toward the interview with Jimmy Kimmel as an acknowledgment of his crime.

Not only Yung but B.G Knocc also believed that Eazy-E was murdered. Knocc, who had signed to Eazy-E’s Ruthless Records, said in an interview with HipHopDx that he believed deep down in his heart that somebody did something very wrong to Eric aka Eazy-E.

Eazy-E’s son Marquise Wright aka Yung Eazy is a rising name when it comes to YouTube. His YouTube, IAmYungEazy has nearly 1.5k subscribers and has amassed nearly 200k views from his eleven videos. On his channel, he has uploaded rap videos that are quite popular amongst his fans. His rapping career started with the song Famous.

Talking about his 11 siblings including half-siblings, not all are famous like their dad. Amongst the eleven Erin Bria Wright, Dominick Wright, Elijah Wright, Daijah Wright, Lil Eazy-E and Derrek Wright aka Baby Eazy-E are famous. Some of his other siblings include Raven Wright and David Wright.