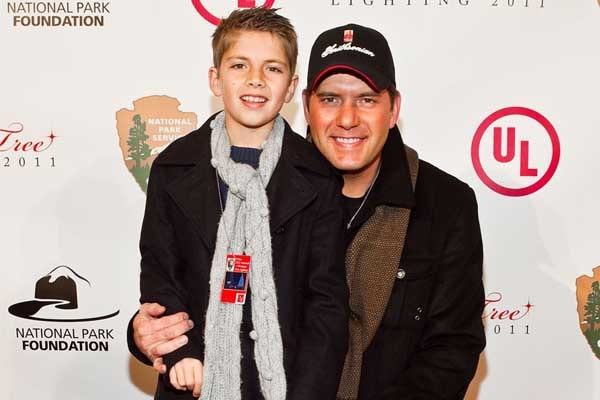 Rodney Allan Atkins, an American country music singer, and songwriter tied his knot with Tammy Jo McDonald on 26 April 1998 and fathered a son named Elijah Atkins. But unfortunately, things didn’t work out between the ex-couple, so they separated in 2012. After separating from his ex-wife, he married Rose Falcon on the 10th of November 2013. Together, they are proud parents of two children, Ryder Falcon Atkins, and Scout Falcon Atkins. In total, the country singer is a proud father of three children.

His Father Attempted To Kill His Mother

Rodney was arrested in November of 2011 for allegedly trying to smother his wife with a pillow. At that time, the ten-year-old Elijah stood, watching his father trying to kill his mother. Rodney was later released on $2,500 bail three hours after the arrest, he was ordered by the court to take anger assessment classes. Now seeing Elijah with his father proves that things between them are fine, and the two share a strong bond.

Furthermore, in 2017, Elijah was the victim of a car accident. He was involved in a drunk-driving accident as a methed-out drunk driver hit the then sixteen years old Elijah. However, he was lucky enough to walk out unharmed, but it totaled his truck. Later in an interview he said, he has learned that when the worst things happen in your life, it happens to keep your head up because that’s when some of the best things are gonna happen.

His Relationship With His Step-Mother And Half Sibling

Elijah loves spending time looking after his younger brothers. Well, he was even present when his step-mother gave birth to his younger brother Ryder. Not only that, he was present at the birth birthday party of brother Ryder and has also taught him how to swim. He, along with his father and brothers, adore watching games at the stadium.

To conclude, the Atkins family is the living example of keeping your past a past. Together, they have come through so much, yet today they stand strong together. They adore each other’s company and love spending time with one another.

Elijah Atkins’ name is of Hebrew origin, meaning, my God is YAHWEH.