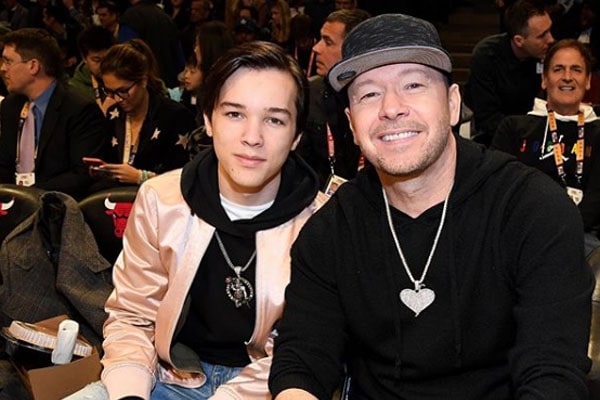 Donnie Wahlberg is an American singer, songwriter, actor, record producer, and also a film producer. Peeking at his personal life and family, Donnie is the father of two sons, and among them, Elijah Hendrix Wahlberg was born on August 20, 2001. He is Donnie Wahlberg’s son with his ex-wife, Kimberly Fey.

Elijah Hendrix has an elder brother named Xavier Alexander Wahlberg. As for Elijah’s parents, they divorced each other in August 2008 after nine years of marriage. Donnie is in a marital relationship with actress Jenna McCarthy at the moment. Now, let’s not keep wasting any time and get to know more about Donnie Wahlberg’s son, Elijah Hendrix Wahlberg.

Elijah Hendrix Seems To Be Interested In The Music Industry

As we dug deeper, it apparently seems like Elijah has a great interest to contribute to the music area. Going through Elijah’s Instagram Profile, he mentioned in his bio that he is studying music at Berklee College of Music in Boston, Massachusetts. Perhaps he was influenced by Donnie Wahlberg and is willing to step in the music industry.

You may not know about this, but Elijah Wahlberg helped his dad’s boy band, New Kids On The Block, with their music video, ‘80s Baby’, for video content. Maybe Donnie is also helping him out with his projects and all. We could imagine seeing Elijah Hendrix becoming successful just like his dad. Also, his parents would be very proud of him if he succeeds in achieving something like that.

So, we can say that Elijah Hendrix followed his dad’s footsteps and decided to choose a career in the music industry. Let’s wish Donnie Wahlberg’s son a stroke of good luck with his career journey.

Attachment With His Family

It looks as though Donnie Wahlberg’s son, Elijah, is close to his family members. Well, the father-son duo has a great bond. Elijah is seen more often hanging out with his dad. They love to watch the Celtics game together. Similarly, Donnie never forgets to wish his son on his birthdays.

However, most of us are not familiar with Elijah’s brother and mother since they are living a low-key life. But we assume he has a close relationship with them and seemingly visits them frequently.

As for Elijah Hendrix’s girlfriend, love life, and relationships, he seems to be in a committed relationship with his girlfriend, Grace Adduci. The cute and adorable couple can’t get enough of each other. Both of them seem happy with how everything is going. Elijah and his beautiful girlfriend, Grace, love going on romantic dates, watch Celtics games, and clicking lovely photos most of the time.

Talking about Grace Adduci, capturing inside the lens looks to be her passion. She has a VSCO Profile with a cool collection of her gallery. Perhaps she is a photographer by profession. Keeping all the things aside, we hope Elijah and Grace’s love for each other never fades away.

The name Elijah came from the Hebrew name ‘Eliyyahu,’ meaning ‘my God is YAHWEH.’ Hendrix came from the Germanic name ‘Heimirich’ where ‘Heim’ refers to home, and ‘ric’ means ‘ruler, power.’