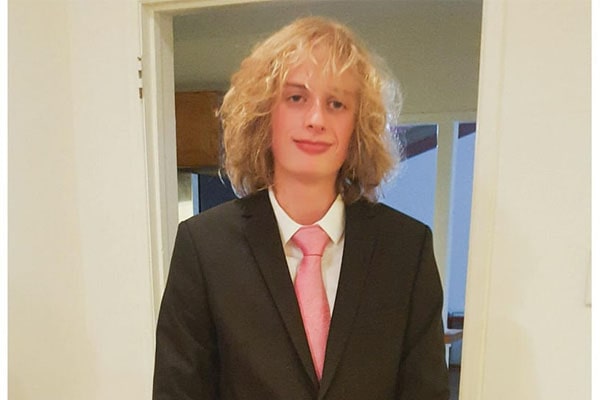 Gorgeous Tracy Kristine Nelson is a talented American actress, dancer, and writer. Well, Ricky Nelson and Kristin Nelson‘s daughter is also a loving mother. She is the mother of two children she had from her previous relationships.

Among them, Elijah Nelson Clark is Tracy Nelson‘s son, whom she had with her ex-boyfriend, Chris Clark, and was born on Aug 22, 2001. He has a half-sister named Remington Elizabeth Moses. She is Tracy’s daughter with her ex-husband, William R. Moses. Elijah also has a small brother, Griffin.

Many people are not familiar with Elijah as they are with his mother, Tracy Nelson. So, without any further ado, let’s get to know more about him.

Well, Tracy Nelson’s son and Ricky Nelson’s grandson, Elijah, is a great guitar player. He is really into the musical instrument. It looks as if he is following his grandfather’s footsteps. Elijah sure does play the guitar like a professional.

Elijah’s mom, Tracy, also posted a video of her son playing the guitar on her Facebook. She is so proud to see her son mastering the guitar. It could be the rise of Elijah’s career indeed. Tracy also revealed that Elijah had been learning “Stray Cat Strut” by the Stay Cats. And the guitarist of the band, Brian Setzer, was his “new guitar hero.”

Tracy has posted some videos of Elijah, doing his thing on guitar. Whether he likes his mom recording him or not, he is undoubtedly growing as an excellent guitar player. Who knows, he might jump into stardom in the next few years.

Since Elijah’s mom loves posting her children’s photos on her social media handle, she has posted a bunch of Elijah’s photos. Tracy even posted her son, Elijah, all happy with his lovely girl, Maria, in Feb 2020. The two had beautiful smiles on their face.

As Elijah has a very subtle and private life, it is hard to know more about his girlfriend. Tracy Nelson had also posted a photo of her son, with his girl going for a homecoming.. So, from that, we can tell how happy Eliajh’s mom is to see her son falling in love with his special one. We hope Elijah is still together with his girlfriend/partner, and they are probably having the happiest times of their life.

As mentioned earlier, Tracy Nelson’s son has two half-siblings. Remington is his half-sister from his mom’s side, and little brother, Griffin, is from his dad and step-mom. The bond and connection between Elijah and his half-siblings is a great one.

Elijah loves hanging out with his sister and brother. Eliah had fun with his dad, step-mom, and his brother in Wisconsin and Chicago. Of course, Tracy posted Elijah and Griffin’s photo on Facebook. It shows that there are no hard feelings between Elijah’s parents but respect for each other.

Similarly, he is so much close to his half-sister. Tracy and her two children love spending time together with their mom. Moreover, Elijah goes on lunch dates with his mom as well, which is so adorable. So, in a nutshell, Elijah has a great bond with every family member.

Apart from being the grandson of the legendary musician, Ricky Nelson, and Tracy Nelson’s son, Elijah probably loves privacy and secrecy at the moment. It might be that he is not ready to step into the entertainment industry.

But if Elijah tries to begin his career like his mother and grandfather, we might get to see him as a guitarist in the future. We hope he makes his family very proud of him.

The name Elijah came from the Hebrew word, Eliyahu, meaning ‘My God is Yahweh.’