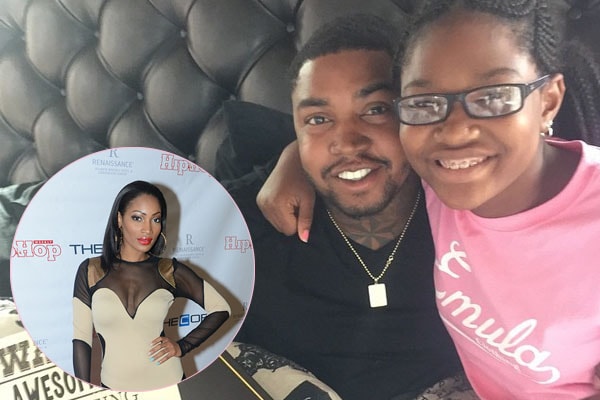 Darryl Kevin Richardson aka Lil Scrappy has got a lovely family. Plus a new child is on the way for Scrappy with his wife Bambi Benson as she is pregnant. Lil Scrappy got married to Bambi in the October of 2017. Just like them, fellow starts of LHHA Stevie J tied the knot with wife Faith Evans. We are sure Emani will be a good elder sibling for her upcoming half brother or sister.

Everybody wants to have a blast at their birthday party and enjoy the day to their fullest. Well, it was not such for Lil Scrappy’s daughter Emani. Back in 2014 when Lil Scrappy booked a salon for his daughter’s 9th birthday party, it ended up being a fight against racism.

As Lil Scrappy and his family were 20 minutes late for the event, the owner refused to let them in. Later on, Police authorities were called to settle the dispute as Scrappy had already paid for the event. Fortunately Scrappy got his money funded but his daughter’s special day was ruined.

A couple of months ago Lil Scrappy along with his daughter Emani and wife Bambi went on a family vacation at SeaWorld Orland, Florida. As the rapper was uploading videos and photos of his family enjoying a lot of the fans were in an awe mood looking at the happy family.

Despite the LHHA star Bambi being her stepmother, Emani has got a great relationship with her. When Bambi made a makeup station in her stepdaughter’s bathroom, Emani cred tears of joy. Plus when Emani and Bambi paired up for a cool photo shoot, many people described them as a “stepmother and stepdaughter relationship goals.”

Emani Richardson:
According to Indian origin, the name Emani means trustworthy, and in Arabic origin it means reliable. Maybe Lil Scrappy chose this name because his daughter is someone whom he can rely on and have trust in. Nevertheless Scrappy chose a name which has got multiple meanings and all means nice.