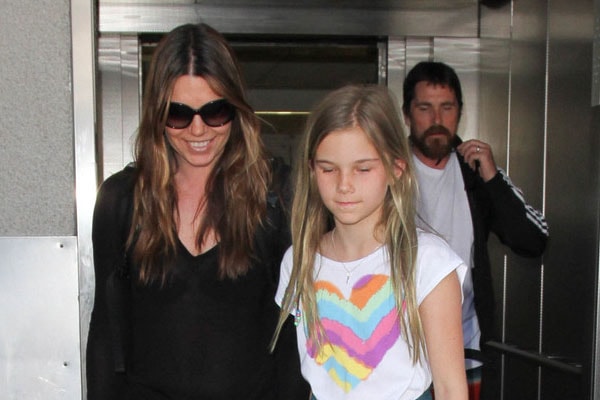 The proud parents of young Emmeline, Christian and Sandra, walked down the aisle on 29 January 2000 in an auspicious ceremony in the presence of family and a few friends. Despite having a private personal life, it is evident that the family shares a strong, intimate bond, and are inseparable.

The prominent actor has portrayed everyone from serial killer Patric Bateman to the superhero Batman. However, the strong character shows a different side of himself when he is with his family and daughter, Emmeline. The 44 years old actor is often seen holding hands with his 12 years old daughter Emmeline alongside little son, Joseph Bale. The versatile actor’s daughter teased him for putting on 19.5 kg weight for the movie American Hustle.

The Oscar-winning actor has lost 60 pounds to appear emaciated in the Machinist, bulked up for Batman, and also gained 43 pounds for American Hustle. According to father Bale, young Emmeline found it funny having a big old gut and a bald head. Furthermore, young Bale would often slap it and tease her father.

The “The Dark Knight Rises” star Bale’s daughter, Emmeline has an intense love for her father’s character Batman. Daughter Bale loves it when Christian does the Batman voice for her and gets a thrill out of his of his on-screen character. Likewise, Bale’s daughter also loves the Star Wars movie franchise. Christian’s daughter’s interest in the Star Wars movies has re-ignited Bale’s interest in the franchise.

According to father Bale, Darth Vader was the first love of his young daughter and also absolutely adores Darth Maul. Besides that, the young Bale stood near Darth Maul at Disneyland and was not scared even after he growled and showed his teeth at her. Father Christian never fails to gush about his family and daughter. Furthermore, Bale admits that he has fallen into that cliché of a dad who happily talks about his daughter endlessly.

The beautiful name Emmeline or Ameline is a unique name for a baby girl. The medieval name “Emmeline” is a short form of Germanic names beginning with the element “amal” which means “work”.