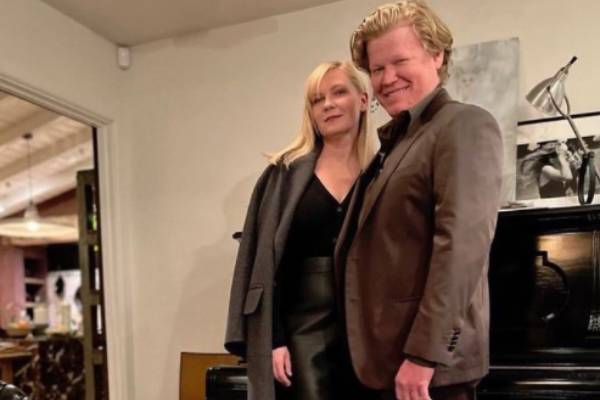 Jesse Lon Plemons, aka Jesse Plemons, is a popular American actor. The 33-year-old is famous for his role as Todd Alquist in the classic series Breaking Bad. Plemmons appeared on the screen first for a Coca-Cola advertisement just at the age of three. Since then, he has acted in many movies like Paul, Battleship, The Power of the Dog, Game Night, etc.

Besides his acting career, Jesse is also a devoted family person. He has been in a romantic relationship with his fiancee Kirsten Dunst since 2016. The pair met while shooting for the series Fargo and now have a family together. During their relationship, the couple has welcomed two kids into this world.

So, in today’s article, let’s talk about Jesse Plemons’ children and see how they are doing.

His Partner Came Up With Their First Son’s Name

Jesse Plemon’s son Ennis Howard Plemons was born as his eldest child on 3rd May 2018 in Santa Monica, California. This was the first time that Jesse or his partner Kirsten had become a parent.

Interestingly, Ennis’ mom got his name from one of those baby websites that suggest names. Talking to Jimmy Kimmel, Kirsten talked about the incident fondly, describing she liked the sound of the term “Ennis,” comparing it to old cowboy names.

Furthermore, she brainstormed all the possible names that other kids would use to tease her son, referring to some ugly words adding P in front of Ennis’ name.

The couple has managed to keep their son’s profile and life private for most parts. However, in 2019, the audience got their first glimpse of Jesse Plemon’s son. Ennis accompanied his parents to see his mother Kirsten get her star on the Hollywood Walk of Fame.

Also Read: Get To Know About J.K. Simmons’ Daughter

Jesse Plemons’ other son with Kirsten Dunst, James Robert Plemons, was born in May 2021. His mother, Kirsten described him as the Big Kahuna of the family, an angel who is hungry and heavy.

Furthermore, James’s mother, Kirsten, even did a photo shoot while he was still inside her womb. Talking about the photoshoot, Dunst joked that she would complain that she could not get up whenever she was on the floor for a shot.

James is the youngest son among Jesse Plemons’ children. He is three years younger than his big brother, Ennis. So, James might be showered with love and care by his parents and elder sibling every day, being the youngest star of the family.

Must Be Living A Comfortable Lifestyle

Jesse Plemon’s children, Ennis and James, must love their lives. The celebrity kids live in Jesse and Kirsten’s cozy San Fernando Valley ranch. Their beautiful house was featured on the cover of the magazine Architectural Digest for the month of October. The place consisted of remarkable heirlooms and decorative interiors.

Furthermore, the children’s parents must be taking good care of them, fulfilling their needs and requirements thanks to their rich fortune. Nonetheless, the kids’ father, Jesse Plemons’ net worth is over $8 million. Similarly, their mother, Kirsten Dunst’s net worth is valued at $25 million.

So, Jesse Plemons’ children must be enjoying their life. We wish the boys’ parents all the best for their upcoming Oscars. The couple is nominated in the category of Best Supporting Actors for their roles in the film, The Power of the Dog.

The word Ennis is derived from Irish origin. It means Island.

The word James is derived from Hebrew origin. It means supplanter.