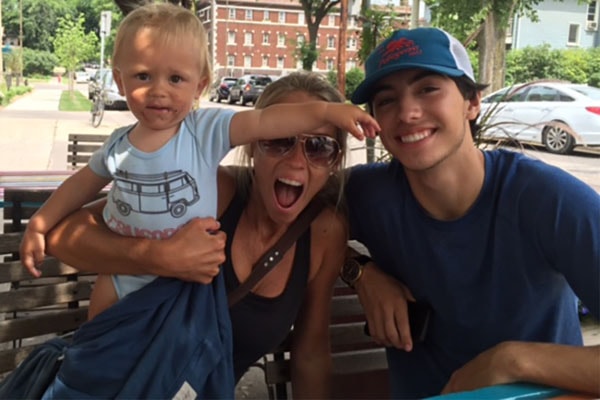 The producer of Celebrity Page, Nicole’s elder son, Ethan, was born on December 24, 1997, in Michigan. Likewise, the younger son of HGTV and DIY Network TV host, Harper was born in July of 2015. Besides that, Mother Nichole is struggling with the sole custody of her children with ex-boyfriends.

The HGTV star, Nicole, is the proud mother of a grown-up twenty-one years old son, Ethan. However, Curtis is in a battle with the father of her eldest son, Steve Chimi. According to The Blast, Father Cimini owes Nicole a hefty sum of $14, 685.54 in back child support. Furthermore, not showing up for his latest court hearing has resulted in an arrest warrant.

The proud mother of two, Nicole, has recently published the book “Better Than New” which explains her children, motherhood, relationships, and career. The popular book is USA Today and A New York Times bestseller book.

The youngest child and little brother of baby Ethan. Harper was born on the year 2015 with Nicole’s ex-boyfriend, Shane Maguire. The young baby Harper lives with his mother with a joint custody case. However, the co-parenting with Curtis has been a nightmare for Maguire. The baby father of young Harper, Shane accuses Nicole of intentionally sabotaging the relationship between the father-son relationship and furthermore, “playing games” with the times and locations while exchanging Harper.

The struggling single mother, Nicole, had a hard time fighting for the custody of her younger son. However, The public figure was accused of hiding her son Harper from his father and denying his parenting time. Despite the constant struggle to fight for the custody of her kids, the family members of Nicole didn’t lay any hands for support. Moreover, even Nicole’s mom assumed her wrong for giving birth to babies and embracing motherhood before marriage.

The lovely name Ethan is a unique name given to a baby boy. The masculine name is of Hebrew origin and means strong and long-lived. Besides that, the holy name appears eight times in the Hebrew Bible.

The unique name “Harper” is a unisex name and is the transferred use of the surname derived from the Middle English hard. The name “Harper” arises as an occupational name for a harp player.