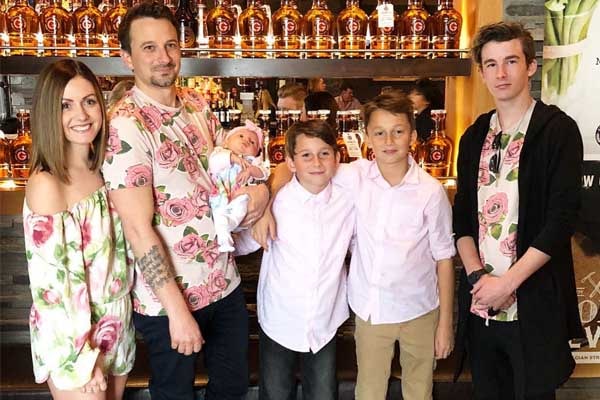 Evan Bass, a former Bachelorette, and Bachelor in Paradise contestant, finally found true love with Carly Waddell. The two walked out of the show engaged and got married on June 17, 2017. Together the couple shares two children, Isabella Evelyn Bass, and Chuck Bass.

Apart from that, Evan Bass also has three sons from a prior relationship. His eldest son Nathan Bass was born on June 29, 2001, then came Liam Bass on June 8, 2005. Finally, Evan welcomed his third son Ensley Bass on the 13th of May 2008.  Evan is like an open book, everyone can read from it, however, some of the pages are kept hidden from the public’s eye. Those pages contain his past relationship and his three sons. So, let’s get to know more about his sons and their baby mama.

Baby Mama Of His Three Sons

Evan Bass’ baby mama’s name is Marie Bass, she is a horse trainer at Pinnacle Stables Eagleville. Along with Jason Lancaster, she trains horses to reach their full potential while helping owners to achieve their own personal competition goals.

Marie is a professional horse rider, but most importantly, she loves those innocent creatures and adores taking care of them. She has uploaded tons of videos and pictures showing off her horse-riding skills.

Moving on, Marie Bass’s profession is horse riding, but she is a full-time mother who just adores her three sons. Though they have grown up significantly, but for a mother, her children will always remain small. She loves spending time with them watching games. The family of four is a huge fan of ice-hockey and can often be seen at the stadium cheering for their favorite team. Also, the family has developed a tradition of eating sushi a day after Thanksgiving, which they like to call it sushi detox.

As we have already mentioned that Evan was previously in a relationship with Marie Bass and, at the time, being, he fathered three sons. However, things didn’t work out between them so, the ex-pair decided to part their ways. Despite separating from his ex-partner, Evan still shares a strong bond with his three sons. He often spends holidays with his son and his wife, Carly.

Evan Bass’ eldest son’s name is Nathan Bass, and he is an adventurous person who loves having fun. He has inherited his mother’s good looks and his father’s charming nature. He and his two younger brothers were the best men in their father’s wedding. Speaking of his relationship with his step-mother and half-siblings, he has always stood there as the eldest son of the house fulfilling his duties.

Moving on to Evan Bass’ two sons, Ensley Bass and Liam Bass. Liam is the older one amongst the two. They both seem to be living quite a private life as both of their Instagram accounts are privatized. Like their elder brother Nathan, they too love having fun. In fact, we can see them having a fun time with their mother. As addressed above, the family of four adores each other’s company, especially the three brothers, they share a special bond.

While Evan was filming for The Bachelorette, and then Bachelor in Paradise, his ex-wife wrote a Facebook post where she called him a Deadbeat dad. It was all during the heat of one angry moment, Marie said she was outraged cause she read an article at the time about Evan being this amazing dad that packed lunches and helped with homework, which was not the case at the time being.

Evan was busy shooting for his Tv-show and didn’t have time for his kids at all. He would see them maybe a day a week, perhaps a day and a half. But he and his ex-partner shared 50/50 custody, so technically he was supposed to be seeing them every other week for the whole week, which was not the case. While she was mentioning him as a deadbeat dad, she never meant Evan didn’t pay her child support on time, she meant he did not spend time with his kids as much as he used too. But now Evan spends more time with his kids, even enjoying holidays with them.

Evan and Carly were amongst the lucky ones who found love in the American Tv-show Bachelor in Paradise. Together, the couple shares two beautiful children, a daughter named Isabella Evelyn Bass and a son  Charles “Charlie” Wolfe Bass. Evan Bass’ daughter Isabella was born on February 16, 2018, whereas his son Charles who he likes to call Chuck Bass was born on November 12, 2019.

To conclude, Evan is a proud and caring father of four sons and a daughter. Maybe that’s why his daughter Isabella is loved by all, she is daddy’s princess and her brother’s little sister.

Liam Bass: Liam’s name is of Irish origin, meaning helmet of will.