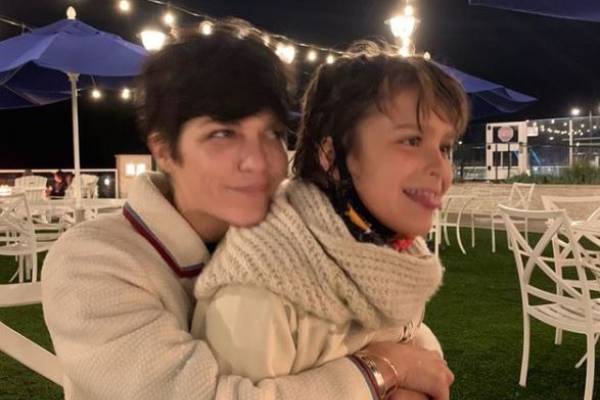 Selma Blair is an outstanding actress known for her role in Brown’s Requiem. Besides appearing in several movies and tv series, she is also a devoted mother of a son she welcomed with her ex-boyfriend, Jason Bleick.

Therefore, here we shall talk about Selma Blair’s son, Arthur Saint Bleick, and his whereabouts. Also, see Selma talk about how MS impacted her son’s life.

As mentioned earlier, Selma Blair is not only a talented actress but also a great mother to her baby boy. The Brown’s Requiem actress welcomed her son, Arthur Saint Bleick, in July 2011 with her then-boyfriend, Jason Bleick.

Blair’s representative confirmed that Selma had given birth to Arthur, who weighed 7.12 lbs. She reportedly had painful labor as her son was weeks late. However, giving birth to her little one was one of the most rewarding experiences for the Grammy nominee.

The couple chose to keep the sex of their child under wraps until the delivery. Moreover, Arthur Saint is the couple’s only child together.

The mom and dad were pretty happy about the new addition to their family. However, their relationship as romantic partners did not last long.

Arthur Saint’s Parents Separated Within A Year After

Aforementioned, Arthur Saint Bleick’s mom and dad were pretty happy about his arrival. But only a year after Arthur’s birth, Selma and Jason decided to separate.

The former couple started dating after they collaborated on Jason’s line EVER in 2010. The following year, they announced their pregnancy and welcomed their little one.

Although they were happy about their son, Selma and Jason’s relationship took a turn for the worse. So, they decided to go separate ways but continued to co-parent their son.

Selma Talked About How MS Impacted Her Son

Selma Blair and Jason Bleick continued to raise their son with great love and care after their separation. However, life took a turn after Selma was diagnosed with multiple sclerosis and had to recalibrate her life. She had to change not only her lifestyle but her son’s life too.

Moreover, Blair revealed that she was always honest about her issues with her baby daddy or Arthur Saint Bleick’s dad, Jason. Also, Selma talked about how MS impacted her time with her son. She could not perform regular things like most moms due to her illness and felt defeated most of the time.

However, despite seeing his mother’s suffering, Arthur has never viewed her physical weakness in a negative light. Rather, for the young man, his mom was the bravest of all. He apparently stated that his mommy was not sick and loved having her visit his school.

Selma Blair’s son, Arthur, said that he loved how she made his classmate laugh with her answers to their questions. So while the actress was worried about being an embarrassment to her kid, knowing that she was not is one of the proudest moments for her.

Furthermore, Arthur Saint Bleick is heavily involved in his mom’s life while she is dealing with the side effects of MS. For example, Selma had trouble raising her hand to style her hair, so she decided to cut it short. And helping her with the journey was her kid, who worked with an electric razor to give his mom a new look.

Years after opening up about her diagnosis, Selma still goes through various physical troubles due to MS flare-ups. But she is continuing to fight for a quality life for herself and her kid.

While Selma and her family’s life has been impacted by her illness, they have managed to manage to live with it. Also, Blair’s child, Arthur, still gets to enjoy his time as a young boy. He is very interested in skateboarding and going through Blair and Jason’s Instagram, we can see that he is great at it.

Also, Arthur Saint loves to go on hikes and camp with his dad. He and his father are both very fond of outdoor activities and spend quality time traveling to various destinations.

Going through his parent’s social media pages, it is clear that Selma Blair’s son, Arthur, is living his best life. And let’s hope we keep on getting new updates about him in the coming days.

The name Arthur has a Celtic origin which means bear. Likewise, Saint means holy and has a Latin origin.