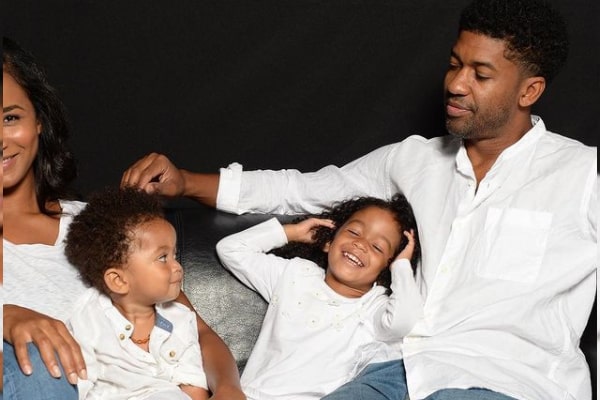 Derek Watkins, professionally famous as Fonzworth Bentley, is an American rapper, actor, tv presenter, and author. Above all, he is a doting father of two adorable kids with producer wife Faune Chambers Watkins.

Therefore, here is everything about Fonzworth Bentley’s daughter, Zoie Alecia Watkins, and her whereabouts.

As mentioned earlier, Fonzworth not only made a spotless career but is also a great father to two adorable kids, with his wife, Faune, Zoie being the oldest.

The Watkins couple welcomed their daughter, Zoie Alecia Watkins, on July 30, 2013, at L.A’s St. Joseph’s Medical Center. Zoie arrived at 6:26 am after several hours of labor. Furthermore, Fonzworth praised his wife, who was in labor for 23 hours and pushed for four and a half hours, all without pain meds.

Moreover, Fonzworth, who had become a father the first time, was proud of his baby mama. He further added that they love their baby girl and said holding his little one was like holding a miracle. As mentioned earlier, Bentley’s daughter arrived at 6:26, and the new parents left the hospital at 7:30 pm that night.

While talking about fatherhood, Fonzworth said that he was grateful to enter this next phase of life. As of now, Bentley’s daughter, Zoie, is almost eight years old and a big sister to her brother, Daniel Watkins as well.

Also, raised by one of the strongest females and parents who take pride in their culture, Zoie already knows she wants to grow into a strong woman.

Moreover, Zoie’s mother, Faune Chambers Watkins often documents her when they’re out on dinner or some mother-daughter time.

Also, Faune shared her baby girl talk about Martin Luther King Jr. on his day. She seems to have understood Luther was a peace preacher and wanted everyone to be treated equally.

Zoie is a spirited kid; she loves her parents and is very aware of her surroundings.

Zoie’s Parents Got Engaged In 2010

The rapper and reality show mentor, Fonzworth, got engaged in June 2010. Bently confirmed the good news with US Magazine, claiming he and his fiancee were very excited.

Zoie’s father asked for his partner’s hand in marriage in December 2009 near their Atlanta hometown. Moreover, he reportedly got down on his knee with a 3-carat Asscher-cut diamond from NYC’s Ozuro Fine Jewelry.

Bentley further added that he tricked her into thinking the proposal would happen on Christmas, but he surprised her right before New Year.

Moreover, Zoie’s mother was too excited to share the news with her mother but, Fonzworth had other plans. Her parents were waiting for them in a restaurant, they all had lunch and then walked them back to the show he proposed.

According to Bentley’s IMDb, the couple exchanged vows on July 10, 2010, and lived happily raising two kids together.

The name Zoie means ‘life’ and has a Greek origin. Likewise, Alecia tells noble and originated from old German.