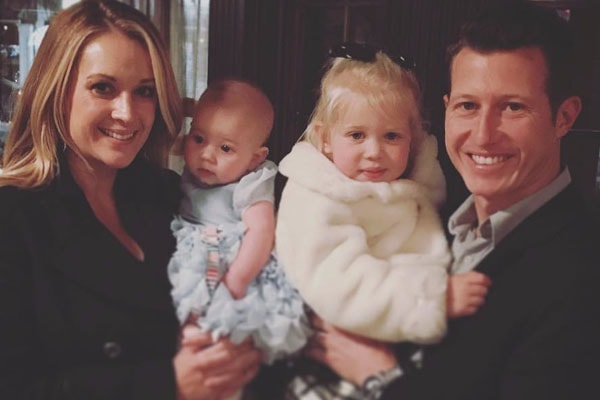 Nicole Briscoe‘s daughter Finley Briscoe was born on the 5th of December, 2013. The cute Finley is the first child of Nicole, and she had Finley with her husband, Ryan Briscoe.

Finley Briscoe has a smaller sister named Blake James Briscoe who was born on the 2nd of July, 2016. Both of Finley’s parents are a famous person, her mother Nicole is a sportscaster for ESPN network, and her father Ryan Briscoe is a professional racing driver.

At 4 and a half years of age, the daughter of Nicole Briscoe, Finley started her school. Nicole uploaded a photo of her daughter Finley on her Instagram to share the happiness of her daughter, and she looked adorable and happy for her first day of kindergarden.

Plus according to the small board, Finley was carrying; she wants to be a Pop Star Princess when she grows up. Well for the time being she is already the princess of her parents Nicole and Ryan Briscoe. Plus only time will let us know if she will be a pop star or not. Finley also has got a Twitter account under her name “Finley Briscoe” and has got only one post till date, maybe when she is old enough to use it on her own, she will start posting other stuff.

Going through the photos of Finley Briscoe, one might also think that Finley might also follow the footsteps of her racer father Nicole and be a racer.

Finley Briscoe Is Close With Her Sister Blake

Nicole Briscoe is a mother of two daughters, and as stated earlier, Finley has got a younger sibling named Blake with whom she is very close with. The two share a lovely sisterlike relationship. It seems like Nicole Briscoe’s daughters spend most of the time together.

Finley is also very close with her mother Nicole along with that the 38-year-old Nicole is very much proud to be the mother of her little one. Just a year ago, Finley surprised her mother on her birthday on the set of Sports Center. Nicole seemed pretty excited at that time.

The name Finley means “fair-headed warrior.” It is the anglicized form of Fionnlagh which is composed of the Gaelic elements ‘Fionn’ and ‘laogh’ meaning fair and warrior respectively.

Ecelebritymirror for more article on Celebrity Babies and Entertainment.