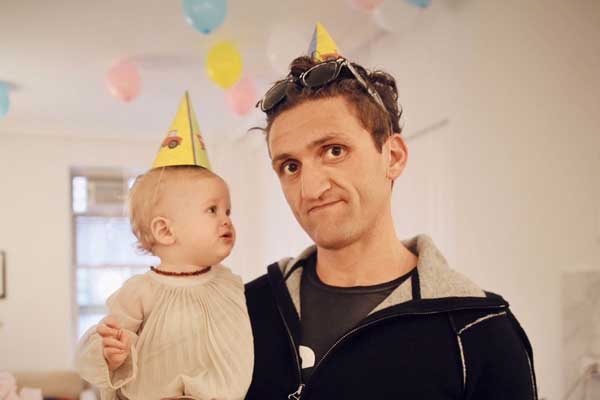 Casey Owen Neistat, an American Youtube personality eloped with Candice Pool in 2005. However, their relationship at that time did not last very long as they separated soon after they got married. But being the man he is, Casey reconciled with Candice, and now the couple is proud parents of two gorgeous daughters.

Casey also fathered a son named Owen Neistat with Robin Harris. Leaving that aside, Casey Neistat‘s daughter Francine Neistat was born on December 6, 2014, and being the blogger he is, Casey filmed the whole thing and simply titled it Her Water Broke. That said, let’s know more about the eldest daughter of the YouTube sensation, Casey.

We all know how much of a wonderful blogger Casey is. Whenever you see him, he is either blogging or skating. So, the day his wife gave birth to their first child, he was blogging like always. He even said that he might be the only dad who came to the hospital where his wife was about to give birth, on the skateboard. While his wife in labor, he was visiting San Francisco, and the moment he learned about his wife’s condition, he booked a flight and rushed to the hospital on a skateboard.

It was a four-minute video where his fans first had a glimpse of his daughter. Casey Neistat’s daughter Francine Neistat was born four hours later he showed up to the hospital. Candice was doing just fine, and their daughter was healthy, which is the most important thing. Casey also filmed a lovely mother-daughter moment on his camera that he has uploaded on his channel.

Is The Center Of Attention

From the moment little Francine first showed up on Casey’s video, fans have just fallen in love with her. Just so cute and gorgeous at the same time as an angel. She has also appeared countless on her father’s blog alongside her little sister Georgie Neistat.

The father-daughter duo shares a lovely relationship. Like, father Casey, Francine has started showing the sigh that when she grows up, she is going to be a blogger like her father. She carries a camera where ever she goes like her pops. That said, Casey just adores his little daughter. He takes her wherever he goes and carries her all the way to the bed at night. He just loves spending time with his two lovely daughters.

We all know how much of a lavish life Casey lives. Many bloggers have already attempted to copy his lifestyle but have failed so far. The way he blogs while skating is just outstanding and amazing at the same time. It’s no surprise that he travels a lot, he not only travels all by himself, but his family also joins him. The lovely family of four can be seen enjoying their time together. Take any of Casey’s Blogs for an instant, he is definitely a family man who adores his family’s company.

Apart from that, he is a cool dad, and all his fans who follow him on his social media pages know that. While spending time together, Casey is sometimes joined by his elder son Owen. Then the family of five go on hiking, surfing, rock climbing, and skiing. Casey has also taken his daughter to Disney Land, and like all little girls, little Francine is a huge fan of Frozen.

Going through the photos, what we can tell is that the YouTuber Casey is trying his best not to reveal the face of his kids in the media.

Casey Neistat’s daughter, Francine Neistat’s name, is of Lain origin, meaning from France or a free one.