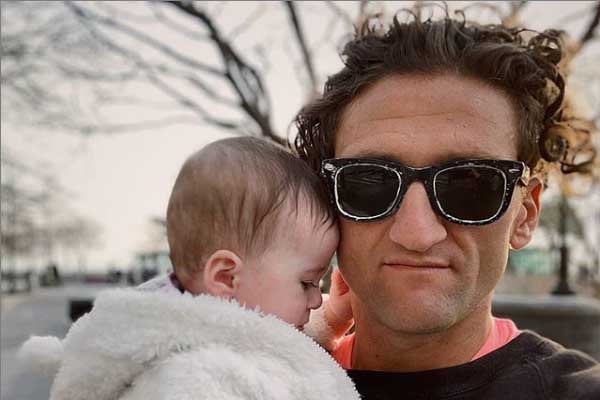 Casey Owen Neistat, an American Youtube personality, is a proud father of three children. He has a son named Owen Neistat with Robin Harris and two daughters with Candice Pool. His eldest daughter Francine Neistat was born on December 6, 2014.

Moving on to Casey Neistat‘s daughter Georgie Neistat, she was born on October 14, 2018. We, as fans, were first introduced to Georgie when she was inside her mother’s womb. On June 7, 2018, Casey confirmed that he and his wife were going to have another kid. That said, let’s know more about Casey’s baby girl, Georgie.

Like her elder sister Francine, Georgie also has already debuted on her father’s YouTube channel. Unlike the time his first daughter was born, this time, Casey was with his wife Candice while she gave birth to their daughter. He uploaded pictures of his wife and newly born daughter on his Instagram account and mentioned his wife and daughter were doing just fine.

In addition to that, after the birth of his daughter Georgie, Casey became somewhat of a protective dad. Since then, he has not uploaded any photos nor videos related to his daughters. A couple of pictures though, have come out, but none were posted by Casey or his wife, Candice.

A video uploaded by Casey, the one where he confirmed his wife was pregnant, Casey Neistat’s wife, Candice, addressed that Francine called her unborn child watermelon. She also said that her elder daughter used to ask whether unborn Georgie was sleeping or not, does watermelon want some play doll? And then she used to stick it to Candice’s belly button.

Moving on, the family of four are delighted and are living a comfortable life. They go on vacation where Casey’s son Owen also joins the crew and makes the fun double. Casey is really close to his son; in fact, Casey tries meeting his son once a week and often visits his college whenever he has time.

Casey had seen a lot of bad days when he was just a teenager. He moved out of his house when he was only fifteen and started living with Robin and her friend. After some time, he fell in love with Robin, and the duo got married. After their son, Owen, was born, the couple unfortunately separated, and Casey moved to New York. However, he never let the distance between him and his son Owen affect their relationship as he visited his son once a week.

Speaking of Georgie’s half-brother Owen, he is a significant part of Casey’s life. He also shares a lovely relationship with his two half-sisters. Owen was also present when Candice gave birth to Georgie. Casey shared a picture of his son holding little Georgie. We can only assume how much of a great elder brother he must be.