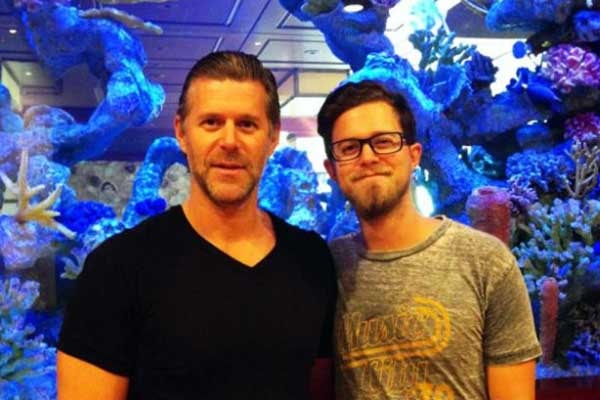 Slade Smiley one of the cast members of the reality Tv show Real Housewives of Orange County is a proud father of three lovely children. He has fathered two sons with ex-girlfriend Michelle Arroyo and a daughter with fiancee Gretchen Rossi.

Slade first appeared with his family in the first season of RHOC and became a fan favorite. At that time, he was in a relationship with Jo De La Rosa. His son Grayson Smiley was born on May 16, 2000, while his daughter Skylar Gray Smiley was born on  July 10, 2019. Information regarding his son Grayson and daughter Skylar is all across the internet but there is limited information about Slade Smiley’s son Gavin Smiley. So, without further ado let’s get to know a little something about Gavin, the eldest amongst the three.

His Education And Qualifications

According to Gavin’s Linkedin profile, he graduated from Ventura College and then moved to The Art Institute of California-Los Angeles. He graduated with a Bachelor’s degree in Science, Game Art & Design in 2014.

Speaking of his work experience, he has worked as a Tech Artist/Programmer in Game Wizard and Graphics/Marketing department in Scosche Industries, Inc. Whereas he is currently working as a Front End Developer in GiddyUp.

We have already mentioned that Gavin is the eldest amongst Slade’s kids so, it’s obvious that he shares a lovely relationship with his siblings. We can see him spending some quality time with his father Slade and step-mother Gretchen. He can also be seen taking care of his younger brother Grayson who has been fighting with brain cancer since he was six.

Speaking of his love life, Gavin is currently engaged to his long time girlfriend Kenna. The two of them met while they were in high school. When asked about how they met, Kenna said when she first saw Gavin he was like the mysterious kid in school that no one knew. And as time went by they became best of friends and started doing everything together, Eventually, the pair realized that they wanted to be together for the rest of the time. So, they started dating when they got to their senior year and have been in a relationship since then.

After a nine-year relationship, Gavin finally decided to propose the love of his life. he secretly planned the whole thing out and said to Kenna that they were going on a trip to Big Bear, CA. She had no clue that she was up for a surprise. The pair climbed the top of the mountain and Slade Smiley’s son Gavin put the GoPro on time-lapse so he could capture a photo every second of his proposal.

Then just like in movies, Gavin Smiley kneeled down and proposed Kenna to become his wife. His proposal was perfect in every way with a beautiful view behind them.

Kenna obviously accepted Gavin’s proposal and the two of them were said to get married in 2019. Gavin’s father and step-mother were so excited to welcome Kenna to their family that they decided to gift the pair something special. What? Let’s find out.

As for an article published by Bravo Tv, Gretchen and Slade were making sure Gavin and Kenna’s wedding, which was said to take place in 2019, is perfect in every way. So, the married pair decided to gift Gavin and Kenna a customized sign welcoming guests to their wedding and some wooden signs.

As news of Gavin and Kenna’s marriage has not come we can assume they are either happily married or have postponed their marriage. Whatever the case is we can say for sure that the pair is together living happily ever after.