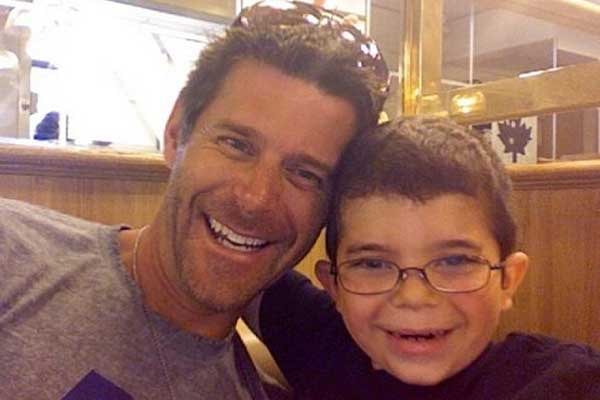 Did you know Slade Smiley‘s son Grayson Smiley is fighting with brain cancer?  But before getting to know more about him, let’s get to know a little something about his father. Slade Smiley is one of the cast members of the reality tv show The Real Housewives of Orange County.

Slade was in a relationship with Michelle Arroyo, and together the ex-pair shares two sons, Gavin Smiley and Grayson Smiley. Though Slade now appears on the RHOC with his fiancee Gretchen Rossi, he was previously seen with his ex-partner and elder son Gavin. Fans didn’t understand the reason behind his younger son not being featured at the time. Later it was revealed that Slade Smiley’s youngest son was diagnosed with brain cancer.

Born on May 16, 2000, Grayson Alexander Arroyo-Smiley is the youngest son of the reality tv star Slade Smiley. At the time of his birth, he was absolutely fine and was born perfectly healthy, but things kind of took a rough turn when he was four years old. He started showing signs of developmental delays, and by the time he was in kindergarden, his vision had deteriorated significantly. In May of 2006, his health got worse day by day, and he began to sleep talk and vomited whenever he was fed. Michelle thought her son was suffering from stomach flu and decided to take him to the hospital so that little Grayson could feel better.

As Grayson’s mother took him to the doctor, they decided to take a quick CT scan and saw a mass in his brain on the scan. It was clear that at the age of six, Grayson had a massive tumor growing inside his head. A month later, Slade Smiley’s son Grayson Smiley was diagnosed with Diffuse Fibrillary Astrocytoma, a rare brain tumor that developed from astrocytoma cells.

Grayson’s tumor had diffused throughout his brain, cerebellum, and spinal cord. His doctors agreed that his tumor couldn’t be surgically removed. So, they decided to go for chemotherapy. Grayson, at a young age, had numerous chemotherapy treatments and surgeries to combat his disease and had spent much of his young life in the hospital.

In November of 2011, Slade and his girlfriend Gretchen hosted a fundraiser in Grayson’s honor. Though Slade was unemployed at the time, he put his fame to work as he organized a fundraising program for the Beckstrand Cancer Foundation. Slade himself spoke about why he was raising funds for the cancer victims. He mentioned that when his son Grayson was diagnosed with brain cancer, he was not destroyed emotionally, but after seven brain surgeries and no cure, Slade was financially destroyed too.

Beckstrand understands the financial strains that cancer places on a family, and they are offering financial hope to the individuals and their families.

In 2012, Slade’s baby mama Michelle threatened to sue him after he was unable to pay child support. He was verbally assaulted on a Hollywood red carpet and was accused of being a deadbeat dad. While Slade and his then-girlfriend Gretchen were stepping off a red carpet in Hollywood, a bill collector jumped out and shouted at Slade to pay his child support.

According to an article published by TMZ, Slade paid his ex-girlfriend $775 per month but was still $95,000 behind. However, Slade’s partner Gretchen with whom he has a daughter named Skylar Gray Smiley defended Slade by mentioning he was not earning as much as he used to. So, the amount of child support he had to pay each month was extremely large and was based on an income he had at the time of his divorce.

More information related to the news hasn’t come out, so we can only hope that Slade pays his child support to his ex-partner, also, let’s hope Grayson is able to get the money, and the treatment he needs. As for the statistics, 46% of patients with Diffuse Fibrillary Astrocytomas survive at 4.7 years, and 0% survive at ten years. However, Grayson’s mother is hoping to beat the odds and change the long-term statistics. For more information regarding Grayson’s condition, visit his official website.

Slade Smiley’s son, Grayson Smiley’s name, is of English origin, meaning Son Of The Grey-Haired One.