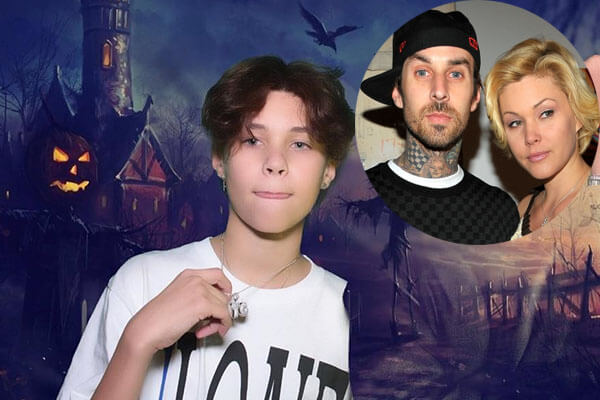 Landon Asher Barker, Travis Barker‘s son with his ex-wife, Shanna Moakler was born on the 9th of October, 2003. He is the couple’s only son as well as the eldest child. Landon’s younger sister is Alabama Luella Barker. Landon’s parents divorced in 2008 after four years of marital life.

Shanna Moakler’s relationship with Oscar de la Hoya gave fruit to a daughter, Atiana de la Hoya, who is Landon’s half-sister. Landon will also celebrate his sweet sixteen this year. He has a lot of rapper friends, and he is into the hip-hop scene himself. He goes by his stage name OTG Landon.

Going through his Instagram, we have evidence that Landon Asher Barker is an aspiring young hip-hop artist. Landon has a lot of friends in the rap field. He is friends with successful young rappers of this generation, such as Lil Gnar, KidDelaRosa, Carl Daw, etc. Landon’s other friend includes the charming fashionista, Zion Sapong. Similarly, he is in good relationship with his gorgeous half-sister, Atiana de la Hoya as well. The half-siblings maintain warm relations and meet up on special occasions like Christmas.

Similarly, Landon is a teenager with great plans for the future. He likely plans to try his luck in the music industry and make great music for his fans. It seems he is already on the right track, as his single, ‘TRUST,’ dropped on YouTube in May 2019. Furthermore, the audio song has earned over 13K views as of June 2019 and was praised by the mesmerized fans.

Certainly, Landon credits his success to his parents and siblings’ support, as well as his talented friends’ creative influence. The future holds a lot of opportunities for Landon, as he’s bound to be a good singer. He will surely try and squeeze out all his musical genius into the microphone. When it comes to Landon Asher’s relationship status, he is possibly single and not dating anybody at the moment.

Landon is an English name that leads to the meaning “long hill” or “ridge.” Asher is a Jewish baby name, meaning “happy, blessed.”