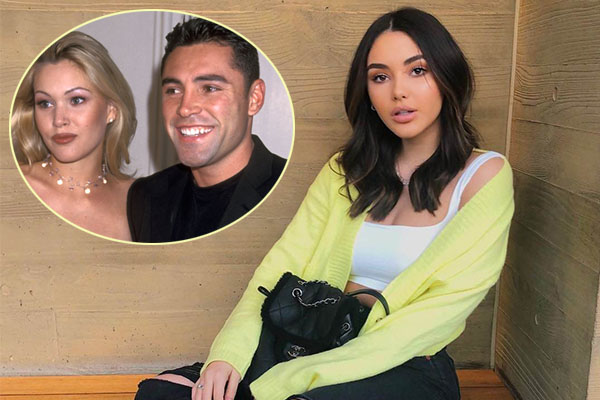 American actress and former Miss USA Shanna Moakler‘s daughter, Atiana De La Hoya, was born on March 29, 1999. Like her mother, the talented Atiana is a model and brand endorser of makeup products on Instagram. Atiana’s father is the Mexican-American boxing legend, Oscar De La Hoya. The former lovebirds Shanna and Oscar started dating in 1997. The couple was briefly engaged.

At a young age, Atiana De La Hoya has established herself as a successful model and product endorser. Atiana’s modeling agent is Triana Lavey, who has her talent management website. As a model, Atiana would certainly look amazing in magazine cover photos and billboard ads. Along with her father Oscar, Atiana recently appeared on MasterChef USA and cooked some delicious recipes!

From her early childhood days, Atiana has always been close to her loving mother. Certainly, Atiana gets her beautiful face from her mom. On Mother’s Day, the lovely daughter never forgets to send her love and warm wishes to her mother.

Atina De La Hoya Has Got A Boyfriend

Moving on towards Atiana De La Hoya’s relationship and dating life, her boyfriend is the dashing Ryan Garcia. The lovebirds appear on several Instagram pictures and they seem to be enjoying their romantic life together. The duo of Atiana and Ryan are a perfect match, no doubt about it!

Apart from being busy with modeling and spending time with her siblings, Atiana also finds time to do Q&A for her fans. She has got a YouTube channel and seems to be an emerging YouTuber. In her Q&A, she answers her fan’s questions about her personal and private life.

In the future, the beautiful daughter of Shanna and Oscar might pursue a career in Hollywood and act in many movies.

Atiana’s father, Oscar, has recently announced that he will be returning to the ring in July 2021. He was part of the broadcast of Saturday night’s fight PPV for the Jake Paul vs. Ben Askren match on April 18, 2021, in Atlanta, Georgia. Shortly after the broadcast was released, he started trending over the internet.

During the broadcast, he was slurring his words while making comments on former UFC heavyweight champion Frank Mir‘s bout with veteran Steve Cunningham. Many fans around the globe were amused by Oscar’s performance in the broadcasting booth. However, most of them thought it was a bizarre act of his when asked about what to expect from his comeback.

Atiana is a feminine name that means “sweet friend of God.” De La is a name of Latin origin, which means “pleasure, delight.”