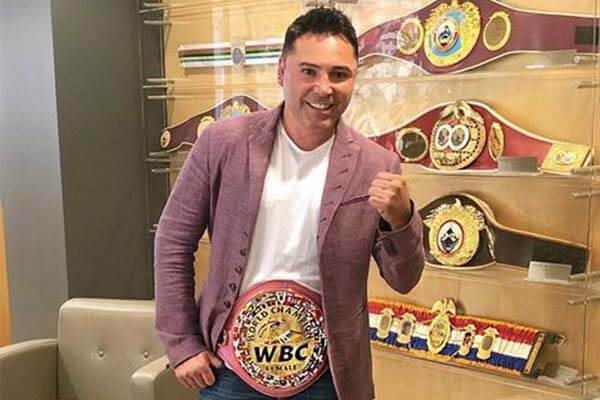 Oscar De La Hoya’s daughter, Atiana De La Hoya, is a model and an aspiring actress who was born on March 29, 1999. She is Oscar’s eldest daughter with his ex-wife, Shanna Moakler.

Apart from being the eldest daughter of her parents, Atiana also has six half-siblings through her parents’ other marriages and relationships. Further, she is currently dating her boyfriend, Ryan Garcia, who is also a professional boxer.

Oscar De La Hoya’s eldest son, Jacob was born on February 18, 1998. He is currently studying at the University of California. Going through his Instagram, it’s clear that Jacob is enjoying life and maintains good relations with his father, Oscar.

Jacob is also close to his siblings and half-sister, Atiana De La Hoya. As for his hobbies and interests, he played football while in high school. Jacob also trains for boxing and accompanies his younger brothers in the boxing ring. It seems like the De La Hoya kids have boxing running in their blood.

Devon De La Hoya, born on November 30, 1998, is boxing legend Oscar De La Hoya’s son. He is enjoying a comfortable life in California. Devon has likely completed his high school education and is attending college at the moment.

In 2018, Devon made his professional debut in the boxing ring. He also gave an interview describing his boxing experience.

In the KTNV Channel 13 interview, a passionate Devon talks about his newfound boxing career. Following his dad’s footsteps, Devon is headed towards a successful boxing career.

Named after his father and born on December 29, 2005, Oscar De La Hoya’s son Oscar Gabriel De La Hoya is spending his teenage years comfortably. He is likely attending middle school at present and has devoted his time to academic study.

When it comes to his hobbies, Oscar Gabriel enjoys boxing, martial arts, and other sports. He likely trains his boxing skills after school and gets encouraged by his dad. Oscar’s mother, Millie Corretjer, is also supportive of her youngest son.

Born on December 29, 2007, Oscar De La Hoya’s daughter Nina Lauren Nenitte De La Hoya is the cutest girl ever. She is her parents’ sweet little angel and she likely goes to school like a good girl.

Nina Lauren, who celebrates her first teen birthday next year, is living an enjoyable childhood. Along with her father Oscar and mother Millie, Nina makes public appearances occasionally. Media photographers love to take her pictures, as she is an adorable little child.

The children’s father, Oscar, has recently announced his comeback to the ring in July 2021. During the match of Jake Paul vs. Ben Askren on April 18, 2021, in Atlanta, Georgia, he was part of the broadcasting for the match.

During the broadcast, he was seen slurring his words on the comments that he made on former UFC heavyweight champion Frank Mir‘s bout with veteran Steve Cunningham,  and became a trend on the internet. Many fans tweeted their response and were amused by his performance. Moreover, many fans claimed his act to be bizarre when asked about the expectations from his comeback.

Jacob De La Hoya: Jacob is a Hebrew origin name, which means “to follow, to be behind.”

Nina Lauren Nenitte De La Hoya: Nina is a Hindi name that means “pretty eyes”. Lauren is a Latin origin name, which means “the bay or laurel plant”. The meaning of Nenitte is “grace, favor.”