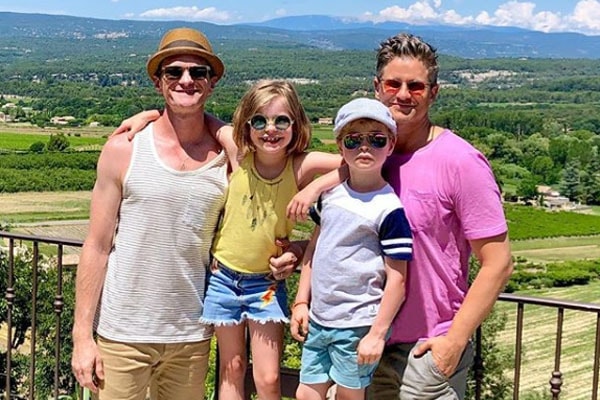 Neil and David had their children via surrogacy. As stated by Neil Patrick Harris’ partner David Burtka, both are thankful for that anonymous lady as they got their children, Gideon Scott, and Harper Grace.

The “How I Met Your Mother” star Neil Patrick Harris not only goes on lovely dates with his daughter but also goes to watch games with his son Gideon. It must amaze a lot of people looking how a big star like Neil takes out time to spend quality filled moments with his kid. When Neil took Gideon to his first ever baseball game, the little Gideon’s happiness contained no boundaries. And looking at the video below, the father-son duo definitely had a great time together.

Along with that, Neil Patrick and his family always have a blast during Halloween. They are the family to look out during the time of Halloween.

As Neil Patrick Harris’ children are fraternal twins, one thing still hasn’t been cleared out yet that who came first, Neil Patrick Harris’ son Gideon Scott or his sister Harper Grace. Nevertheless, both of them share a loving bond with one another. And looking at the photos uploaded by Neil it seems as if they are always by each other’s side. Just a couple of weeks ago, Gideon Scott Burtka-Harris and his sister Harper Grace Burtka-Harris celebrated their 8th birthday.

In an interview, Gideon’s father David stated that he is more like Neil as both of them are intellectual and heady.

All in all, Gideon Scott must be delighted to have such great parents like Neil Patrick Harris and David Burtka. According to David, Gideon’s favorite food include sushi, grilled pork, mint, coconut, and clams.

The name Gideon is a Hebrew name which means ‘Destroyer.’

As for the name Scott, it is of Old English origin which means “a Scotsman.”