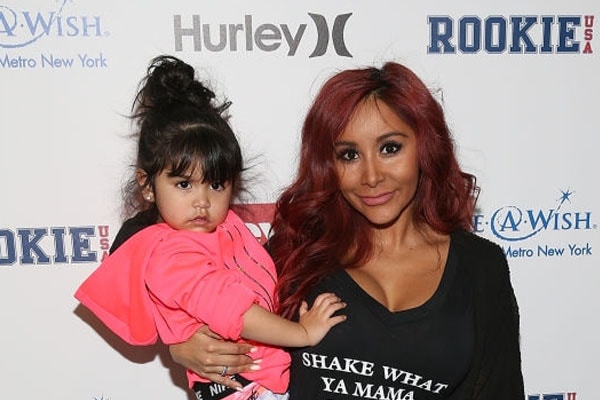 Jersey Shore star Snooki‘s daughter Giovanna Marie LaValle was born on the 26th of September, 2014. Snooki had her daughter with husband Jionni LaValle.

The adorable Giovanna is not the only kid in the family. She has an elder brother named Lorenzo Dominic Lavalle. As Giovanna is the first daughter of Snooki, she adores her little one a lot. It may come as a surprise to many people, but Giovanna has got a clothing line named Sissy’s Sweet Boutique.

Giovanna Marie LaValle, daughter of Nicole Elizabeth Polizzi aka Snooki is already a social media star. Yes, you heard it correct, the 4-year-old Giovanna has got over 183K followers on her Instagram handle ‘sissygiovanna.’ All the feed is filled with the lovely photos of Snooki’s daughter plus, Giovanna surely knows how to flaunt her cuteness.

All in all, Giovanna is the mini-me version of her mother, Snooki. Not only the fans but the 30-year-old reality TV star admits it herself. On her daughter’s third birthday Snooki wished Giovanna stating that she is her mini-me, best friend and also a spirit animal. She further added that she was proud to be the mother of Giovanna.

Well, Snooki has happy to see her child growing up, but she was also concerned that one day Giovanna might pass her in height.

As stated earlier, Snooki’s daughter Giovanna also has a clothing line where they sell stylish goodies for kiddos. Here are some of the items offered by Sissy’s Sweet Boutique along with their respective prices:

Now only time will tell us if Snooki will let her daughter Giovanni become a TV star like her or not. Nevertheless, there is an inseparable bond between the mother-daughter duo of Snooki and Giovanna Marie LaValle.

As for the name Marie, it is the French cognate of Mary. It is derived from Hebrew Miryām which means “sea of sorrow or bitterness.”