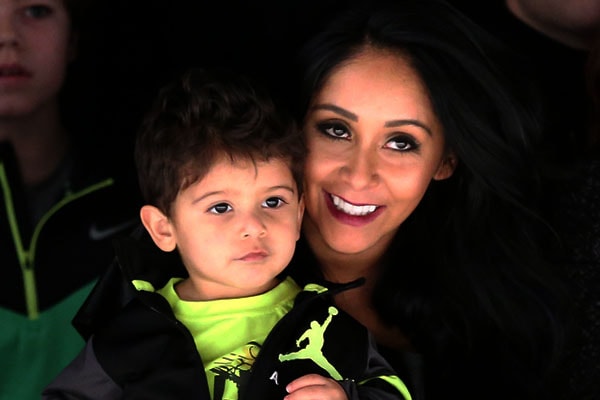 Reality TV star Snooki‘s son Lorenzo Dominic LaValle was born on the 26th of August, 2012 at Saint Barnabas Medical Center in Livingston. The little Lorenzo weighed in at 6 pounds and 5 ounces. Lorenzo was the first born of Snooki and her husband, Jionni LaValle.

After giving birth to Lorenzo, Snooki tweeted that being a mom is an amazing feeling. Lorenzo Dominic is the eldest among the two children of Snooki. He has a younger sister named Giovanna Marie LaValle.

Who doesn’t love Halloween? Well, many people don’t, and Lorenzo is not one of them. The 6-year-old son of Snooki loves Halloween. On this years edition, the handsome Lorenzo dressed up as Black Spiderman.and his younger sister Giovanna and mother Snooki dressed up as the  Super Woman. The mother-children trio was looking sharp for this year.

Apart from this year, for the past years of Halloween, Lorenzo had dressed as the character from Star Wars and Teenage Mutant Ninja Turtle. Now let’s see what will Snooki’s son Lorenzo Dominic LaValle will be for the Halloween of next year.

It looks like not just Lorenzo, but his father Jionni, mother Snooki and sister Giovanna too loves Halloween.

As stated earlier, Lorenzo has a baby sister named Giovanna Marie LaValle.Lorenzo and Giovanna can be often spotted together enjoying time with one another. We bet that as a real big brother, Lorenzo will always be by the side of his little sibling to protect her.

Having an age difference of just two years between the two siblings, Lorenzo and Giovanna look a friend of one another. The Jersey Shore star Snooki must be really proud of her younglings.

The name Lorenzo is the Spanish and Italian version of the name Lawrence. It originated from the Latin Laurentius which means someone from the ancient city of Laurentum.

As for the name Dominic, it is a name from Roman Catholics. It is a diminutive form of  ‘Dominicus’ which means “belonging to God.”