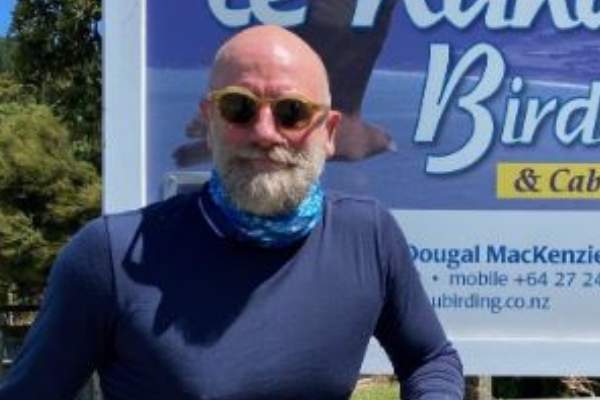 Graham McTavish is a popular actor and author of Scottish nationality. He has performed multiple roles, including Loki in several Marvel animated projects, Dwalin in The Hobbit film trilogy, Vlad Dracula Tepes in Castlevania, and others. Furthermore, his fame increased after appearing in House of The Dragon as Harrold Westerling.

Graham’s successful professional career has established him to be one of the most talented actors of his time. To talk about his personal life, he is a proud father of two girls, whom he shares with his ex-wife Gwen Isaac. Have the daughters caught the acting bug? Let’s find out in this article along with detailed information about Graham McTavish’s children.

As mentioned earlier, The Hobbit star welcomed two kids with his former spouse, Gwen. Graham McTavish’s daughter, Honor McTavish, is the eldest. She was born on November 28, 2006. Five years later, in 2011, the ex-couple’s baby girl, Hope McTavish, arrived. However, Honor and Hope’s dad revealed that they were 10 and 5 years, respectively, in a July 2017 interview.

The McTavish sisters must be having a wonderful time growing up. As they have only five years of age difference, they must be best of friends. Hopefully, Graham McTavish’s children will continue loving each other and grow up to become good humans.

Being born into a celebrity family makes it difficult not to be interested in the entertainment world. As already mentioned, Graham is an actor, and his former wife is a director. Just like the sports personality’s kid gets interested in sports from a very young age, Graham McTavish’s oldest daughter has also caught an acting bug.

Not only that, Honor has already appeared as “Cute Hobbit” in The Hobbit: An Unexpected Journey (2012). She was featured in the film’s flashback scene at the Old Took’s party.

Furthermore, in 2017, Honor McTavish’s father talked about her acting interest in an interview. He stated that he wants to encourage and motivate them but does not want to push them too hard. His firstborn has an acting interest, but a part of him feels dread and says, “Don’t do it.”

Daddy McTavish went on to compare his upbringing to his daughters. He is immensely lucky as his parents never discouraged him from being an actor in any way. His old man was initially skeptical due to a financial point of view, but he never ever put any barrier in his life. Graham comes from a family that lived far away from the media world, but in the case of Hope and Honor, with him being an actor, it is impossible for them not to have an interest.

Likewise, the McTavish siblings’ father also finds it hard not to tell them to pursue acting careers. Hope and Honor’s grandparents often attended their dad’s plays, and their grandfather used to complain about the scenes. Well, whatever might be their choice, their parents will support them wholeheartedly.

Their Parents Are No Longer Together

Hope and Honor’s dad and mom met in London, from where they moved to Los Angeles to pursue Graham’s acting career. Then, the duo got married. However, the girls’ parents kept the details of their marital life away from the media limelight.

Unfortunately, Honor and Hope’s father and mother’s marriage could not stand the test of time, and they reportedly split before 2020. Like their marriage, the estranged couple kept their separation process away from scrutiny. Following the divorce, the McTavish siblings must be making time to spend between Graham and Gwen.

Moreover, the actor often shares several videos of them helping him during workouts. He regards them as brutal or strict young trainers. The father and daughters often do push-ups and other forms of workouts.

Likewise, Graham’s daughters must spend quality time with their mom. In addition, their father is currently in a relationship with Garance Dore. However, it is not known if their mama has found someone.

Nevertheless, Graham McTavish’s children seem to be doing great. Of course, as they are young, they must be focusing on their studies. We wish them a life full of happiness and bliss. Hopefully, the girls will become great people and make their parents proud in the future.

Primarily used as a female name, Honor has an English origin and means “dignity, reputation.” Likewise, Hope is also a female name that originated from the Old English language, which means “faith or desire of fulfillment.”