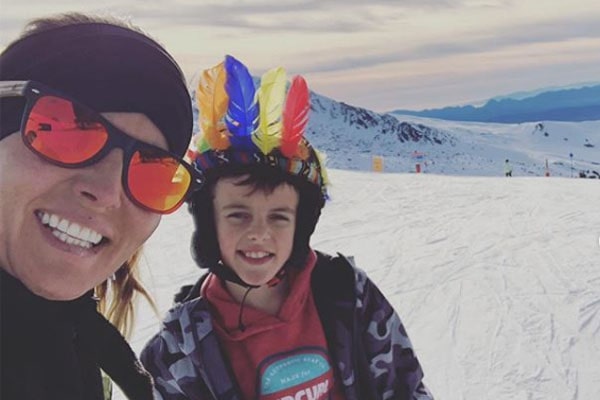 The gorgeous British actress, socialite, and interior designer, Davinia Taylor, is the mother of her son, Grey Gardner. Well, she had him with her ex-husband, Dave Gardner, and was born in June 2007. He is the eldest son of the ex-couple.

Talking about Grey’s parents, they married each other in 2003. However, after seven years of marriage, the two divorced each other in 2010. Grey’s dad, Dave Gardner, went on to marry his wife, Liv Tyler, in 2014. So, without any further delay, let’s get straight down and know more about Davinia Taylor’s son, Grey Gardner.

Grey Gardner’s love for football is boundless, and it’s in his DNA. The 13-year-old boy plays as a defender in his team. He’s perhaps well determined to make something out of his passion. Davinia Taylor’s son is already showing his defending skills from such a young age. He has ‘Red Devil’ blood inside him since he’s a Man Utd fan.

FYI, David Beckham is Grey Gardner’s godfather, and the two have a great bond with each other. How lucky that Grey might be learning so much about football from him. Similarly, Davinia frequently updates her social media handle with Grey’s games.

In Nov 2019, Grey captained a great U13 team to win the shield in the National championships. His mom was so much proud of him, so was his dad. The little boy definitely characterized his leadership as the captain.

If everything goes well, we might get to see him as a professional football player playing for one of the finest teams in the world too.

Reunited With His Mom After Four Months

The Hollyoaks star, Davinia Taylor, had flown to Barcelona to pick her son, Grey. The mother-son were apart for four months due to the coronavirus lockdown. Grey’s mom shared some snaps of their journey together, and she was overjoyed and very excited at the same time.

Davinia got reunited with Grey and her three sons at her Marbella Villa in Spain. The fam had a wonderful time together in Barcelona. She also said that Grey wanted to watch matches rather than appreciate the architecture.

Grey Gardner is based in the U.K. with his dad, Dave, and step-mom, Liv Tyler. In April 2018, Davinia had lost custody of her son to her ex-husband. She also stated humiliation of losing custody drove her to sobriety and would die at rock bottom. But as of now, things between Grey’s parents look to be alright.

Well, in June 2020, Gray Gardner had his 13th birthday, and his mom gave him a great surprise. Davinia Taylor’s son’s smile was precious during his birthday. He had donned a stylish cap with Man Utd jersey. His mom posted family photos on her Instagram on his birthday.

Grey got a portable H2 water filter and a stylish scooter. The birthday celebration was small, as no guests were invited. So, Grey and his brothers got to enjoy a lot.

Gray’s dad also took it to social media to post his nostalgic throwback snaps. Along with that, his godfather, David Beckham, also shared a sweet message to celebrate his milestone birthday.

Since Grey Gardner is Davinia Taylor’s eldest son with her ex-husband, Dave Gardner, he also has three half-brothers. They are Luxx, Asa Leyden, and Jude Leyden.

As for Asa and Jude, they are Davinia’s sons with her partner, Matthew Leyden. But Luxx’s father has not been revealed yet. Not only Grey but his three younger brothers are also die-hard Man Utd fans.

Furthermore Gray also has two half-siblings named Lula Rose Gardner and Sailor Gene Gardner from his dad’s side. They are Dave Gardner’s children with his current wife, Liv Tyler.

The name Grey is of English origin, and it means ‘Grey-haired.’