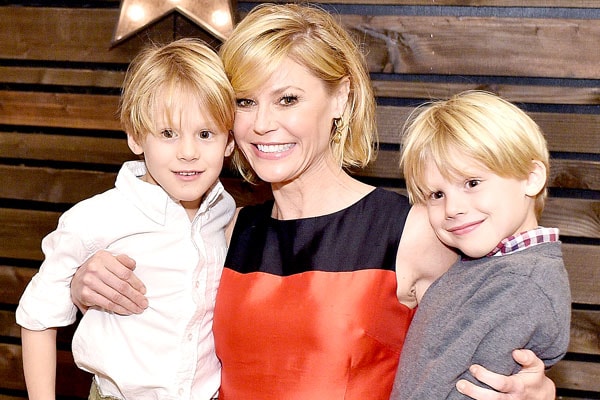 Gustav Phillips and John Phillips, Julie Bowen‘s twin sons together with her ex-husband Scott Phillips were born on the 8th of May 2009. Gustav and John’s parents, Julie and Scott exchanged their wedding rings on the 9th of September 2004. However, after 13 years of their marriage, the former pair separated their ways and got divorced on the 13th of September 2018.

The twin brothers Gustav and John have an older brother named Oliver McLanahan Phillips.  Oliver was born on the 10th of April 2007 in Los Angeles, CA.

Gustav and John Phillips Are The Biggest Fans Of Their Mother

The adorable twin brothers, Gustav and John seem to be a huge fan and supporter of their mother Julie. Julie garnered widespread acclaim for her turn as Claire on the hit TV sitcom, Modern Family. The mother along with her three sons are seen attending various events and talk shows including Jimmy Kimmel Live, Late Night with Jimmy Fallon, and many more.

Not only that but, the family also attended the Baby2Baby Holiday Party Presented by Tiny Prints at Montage Beverly Hills on December 6, 2015.

As mentioned earlier, Julie had attended on the TV show, Jimmy Kimmel Live. There she played the game of guessing her sons being blindfolded. It was really lovely to watch the mother guessing her children among other contestants.

Julie also talks about her sons on other talk shows as well. It looks like there is quite an inseparable bond between the adorable family.

The Twins Are Close With Their Sibling Brother

It is very obvious that the twin brothers are very close to each other. Not only that but both are extremely close with their elder brother, Oliver. Julie’s three sons are also doing some humorous things including pulling each other’s private part, clicking the pictures of their butt, also close to uploading it on the Internet.

The mother of three told the US Weekly that she is a full-time referee in the family. Julie told that she constantly is breaking up fights of her three sons. However, no matter how horrible or mean the siblings are to each other, they instantly make up after two minutes and forget what they fought for.

Gustav Phillips: Gustav is a male given name of old Swedish origin meaning “staff of the Goths.”

John Phillips: John is a boy’s name of Hebrew origin meaning of “God has been gracious.”