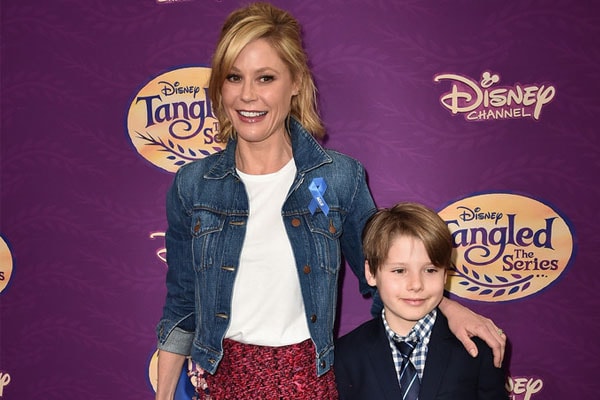 Julie Bowen‘s son Oliver McLanahan Phillips was born on the 10th of April 2007 in Los Angeles, CA. Julie had Oliver together with her ex-husband Scott Phillips. Oliver’s parents, Julie and Scott shared their wedding vows back on the 9th of September 2004. Unfortunately, the former couple got divorced on the 13th of September 2018 after 13 years of marriage.

Oliver is not the only child of his parents. He has got twin brothers, John Phillips and Gustav Phillips. John and Gustav were born on the 8th of May 2009.

Most of the celebrity kids fade away due to their lack of media presence. But this is not the case for Julie Bowen’s son, Oliver. The 12 years old Oliver is seen attending various movie premieres and annual functions along with his mother Julie.

Oliver was also introduced at the second annual Baby Love event by his mother Julie for the first time on 29th September 2007. He was 5 months old at the time during the event, held at the Beverly Hilton Hotel in Los Angeles, CA.

Oliver Is A Mid School Graduate

Julie Bowen’s son Oliver has completed his middle school recently in June 2019. Julie, the Modern Family star couldn’t be a more proud mother, on the occasion of her son’s graduation day.

Obviously, Oliver is very young to decide his career. Who knows, he might follow on his mother’s footsteps on the days to come. As for now, Oliver is enjoying his school life.