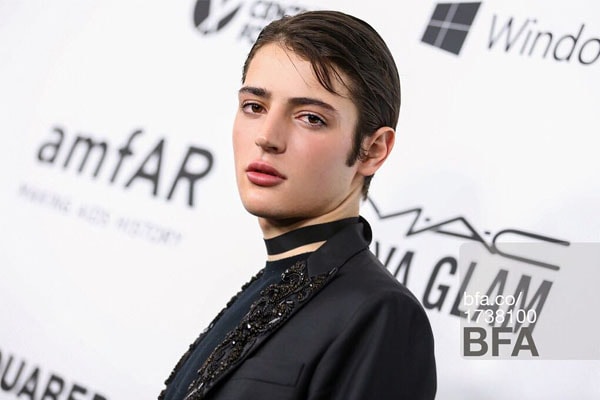 The only son of billionaire Peter Brant and his supermodel wife, Stephanie Seymour’s son, Harry, was born in 1996 as the second son of the family. 22 years old Brant is the younger brother of Peter II and the elder brother of an adorable little sister, Lily Margaret.

The proud parents of Harry Brant, Seymour, and Brant, walked down the aisle in July 1995 in Paris, France, two years after the birth of their first son, Peter. However, the ex-couple decided to end their marital relationship of over 14 years in March 2009.

The party-hopping Brant siblings are makeup moguls too. Harry and his big brother Peter have been fixtures on the New York fashion and society scenes, and this year released a unisex makeup collection with the famous MAC cosmetics.

The young and socially adept sons of supermodel have laid themselves a name and career in the entertainment/modeling industry. Besides that, the Brant siblings are no new to controversies. In 2016,  Harry was in an eye-catching bold Harper’s Bazaar feature with his mother and big brother, Peter Brant. The strangely intimate picture shows the boys caressing their stunning mom and helping her into some risque outfits.

The police busted the youngest son and the second born of the family after allegedly refusing to pay a taxi fare of $27.85. The arrest was after the arrests of his mother and brother in early 2016. The fashion-circuit habitué and her son Harry was charged with resisting arrest, drug possession, and larceny in the sixth degree. The supermodel was not carrying an ID with him of arrest and also refuse to identify himself.

Young Brant took off running from a taxi cab that drove him to Greenwich Avenue and, instead of cooperating, resisted and tried to run away. Furthermore, the police officers found a bag of “a white substance that later tested positive for narcotics” on Harry. Besides that, the billionaire’s son was sweating profusely and was pale in color with a bag full of drugs.

Stephanie Seymour’s son, Harry Brant, passed away at age 24 on January 17, 2021. He died of an accidental overdose of prescription drugs.

The Brant family released a statement announcing the sad news. They told the NYT that they were saddened that their son’s life was cut short by some disease. Brant’s parents further praised Harry’s achievements at a young age. They continued to talk about how wonderful brother, son, uncle, and friend Harry was.

The grieving family further asked for privacy to mourn their loss. Unfortunately, death is inevitable, and accepting is the only way one can overcome their sadness. Therefore, et’s hope Harry Brant rests in peace while the grieving family finds solace in memories.

The lovely name Harry is an English baby name for a baby boy. In English, the meaning of the beautiful name “Harry” is “Ameaning home or house protector. Besides that, the name can also have a meaning Army commander, Army, or wield power. Furthermore, the famous bearer of the name “Harry” is the son of Prince Charles and the late Princess Diana, Prince Harry of England.