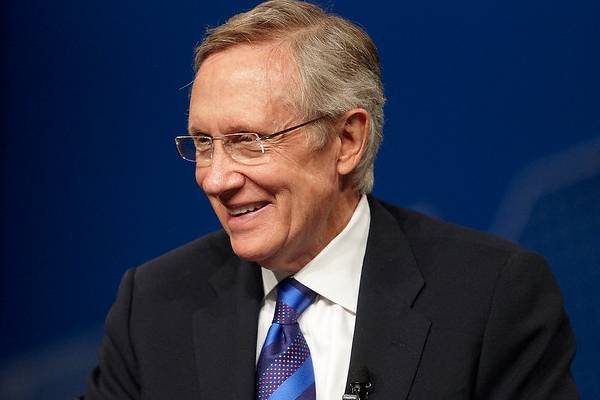 Most of Harry Reid's Children are involved in law and politics. Image Source: Flickr.

There is no doubt that politicians’ deaths are always startling. So, when political giant Harry Mason Reid Jr. died, the world was at a loss of words. Reid served as the U.S. senator from Nevada from 1987 to 2017. Many great leaders and politicians paid tribute to him and spoke of his impact as a state and national leader after his death.

Harry’s wife, Landra Gould, and his children were among many grievers. His passing has brought attention to his family members, and many people are eager to learn more about them. So, let us peek at the late senator Harry Reid‘s children, Lana Reid, Rory Jason Reid, Josh Reid, Key Reid, and Leif Reid, and see what they are up to right now.

Lana Reid Barringer married Steven Barringer, a lawyer, federal lobbyist, and partner in the small Washington-based lobbying firm of McClure, Gerard, and Neuenschwander. According to sources, Lana is a mother to three children whose names and whereabouts remain a secret.

Lana Reid’s husband appears to be a private guy who does not like sharing his life with the media. Moreover, Harry Reid’s son-in-law had previously declined an interview with the Los Angeles Times.

Likewise, Harry Reid’s daughter prefers to live away from the limelight. Consequently, there is little information about her on the internet. While she is active on social media, she rarely posts photographs that reveal anything about her current whereabouts.

Still, Lana Barringer, her husband, and their children were very close to Harry Reid. Harry spoke greatly of them whenever he had the chance. So, his death must have been extremely difficult for his daughter and family.

While her current whereabouts remain a mystery, Lana Barringer made headlines in 2010. Lana and her mother Landra Reid were involved in a car accident on a Washington-area freeway when a tractor-trailer rear-ended their vehicle. They were then taken to the hospital and treated for non-life-threatening injuries. Thankfully, both of them recovered from the accident.

Then, in October 2014, Lana had to undergo surgery in WashingtonD.C., for a severe medical condition. The Reid and Barringer family made sure that no details regarding her surgery got released to the media. Nonetheless, later it was revealed that Harry Reid’s daughter was recovering properly from her surgery.

At present, there has been no more indication of Lana’s health deteriorating. Thus, it is reasonable to believe she is in good health.

Apart from a daughter, Harry Reid has also fathered four amazing boys: Rory Reid, Josh Reid, Key Reid, and Leif Reid. In this section, let us learn in detail what his sons are up to at the moment.

Eldest Son Is An Attorney And Politician

The eldest of Harry Reid’s sons, Rory Reid, was born in Alexandria, Virginia, on July 11, 1963. He then attended the Ed W. Clark High School in Las Vegas. After completing high school, Rory enrolled in Brigham Young University, where he earned a degree in international relations and Spanish. Reid’s eldest son then graduated from J. Reuben Clark Law School in 1987.

In 2002, the Clark County Commission elected and appointed Rory as their Chairman in 2005 and 2007. The commission re-elected Reid in 2006 and, in 2008, served as Nevada’s Chairman of Hillary Clinton‘s presidential campaign. The politician also worked as an adviser on Western issues to Hillary.

In 2009, Rory ran for the post of Governor of Nevada. During his campaign for the position, he had frequent disagreements with his late father. Moreover, in June 2010, Harry Reid’s son dropped his last name from the heading of many campaign advertisements. Unfortunately, Republican Brian Sandoval defeated him in the general election on November 2, 2010.

Talking about his personal life, Rory Reid lives a blissful marital life with his wife, Cindy Reid. The pair first met at the Brigham Young University and were the only two Democrats in Provo, Utah. Initially, Cindy had tried to set Rory up with her roommate.

However, Rory was always interested in Cindy, and the two eventually started dating. They married soon after and have welcomed three children.

Rory Reid’s wife highly supports his career choices and frequently praises him publicly. However, Rory’s spouse and children prefer a low-key lifestyle, so little information about them is publicly available. Still, they must be living a comfortable lifestyle away from media scrutiny.

Josh Reid is a graduate of the University of Arizona law school and holds a master’s in environmental science from Yale. Having studied law, Josh served as Henderson city’s attorney when unanimously selected by the Henderson City Council in November 2011.

The council’s decision to select him as an attorney raised many questions in public, and many even identified Josh as a product of nepotism. Still, Harry Reid’s kid served as an attorney until June 2018 before returning to private practice at Lewis Roca Rothgerber Christie in Las Vegas.

The attorney is currently living a life away from the limelight. Additionally, he has no social media presence. So, we might have to wait a while to see him in the limelight.

The late U.S. senator was a media sensation; however, his children do not share his limelight. That being said, while most of Reid’s children have had their moments in the spotlight, two of his sons, Key Ried and Leif Reid, want to keep their distance from the media.

Nonetheless, it is widely known that all of Harry Reid’s sons work at Lionel Sawyer & Collins, Nevada’s largest law firm. Leif, a graduate of Stanford Law School, is a Nevada-based litigator who has defended mining and tourism sector organizations.

The attorney is also married, and his family enjoys a beautiful life together.

Likewise, Key Reid is a George Mason University School of Law graduate. Key is the former star midfielder on the University of Virginia soccer team. Additionally, he was hired to open the firm’s Washington office in 2002 and help lead its federal lobbying effort with former Sen. Richard H. Bryan.

So, it is safe to assume that Harry’s kids enjoy a comfortable lifestyle even if they do not like sharing their lives on social media.

Reid underwent pancreatic cancer surgery at Johns Hopkins Cancer Center on May 14, 2018, after discovering a tumor on his pancreas during a routine checkup. Then on February 25, 2019, the late U.S senator announced that his cancer was in remission due to early detection and chemotherapy.

After a lengthy battle with pancreas cancer, the former senator passed away at his home in Henderson on December 28, 2021. President Joe Biden and former presidents Barack Obama and Bill Clinton gave tributes to him after his death.

Furthermore, Harry Reid’s children paid tribute to him in his memorial service held at the Smith Center in Las Vegas, Nevada.

His daughter, Lana, reminisced about the past and looked back at their time together. Likewise, Key referred to his father as his best friend and shared his passion for reading and poetry.

Harry’s son Josh shared his father’s words that he read on the Congressional floor in March 2004. Moreover, he stated that his father always made time for his family, even when overworked. Then, his son Rory said that any conversation about their family or his father should start and conclude with Landra, their mother.

Harry Reid cherished his family and spent a great deal of time with his wife, children, and grandchildren. His death must have affected them all deeply. So, let us pray for his family’s well-being and hope that their wounds heal with time.

Firstly, Lana is a female name with multiple origins. In Hawaiin, the word means calm as still waters or afloat. Secondly, the name Key comes from the Anglo-Saxon tribes of Britain’s old inheritance, and it is derived from kay, an Old French word which became kaye, keye, and keay in Old English, all of which are words for docks or quays.

Then, the name Rory of Irish heritage means red king. Likewise, Josh is of Hebrew origin that means God Is My Salvation. Finally, Leif of Scandinavian origin means heir or loved.