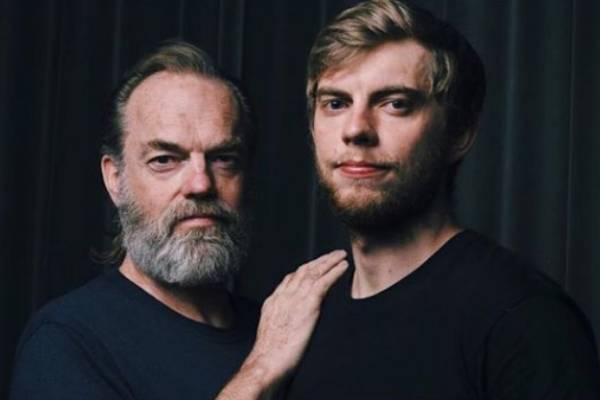 Hugo Wallace Weaving is a household name in Hollywood. The actor rose to prominence through roles in epic films such as Lord of the Rings, The Matrix, and V for Vendetta. Hugo Weaving is also well-known for his voice acting abilities, having voiced characters in films such as Happy Feet, Transformers: Revenge of the Fallen, and Legend of the Guardians: The Owls of Ga’Hoole.

As the media frequently covers Weaving’s professional life, we get a glimpse of how hectic his life is. So, it isn’t easy to picture the actor as a loving partner and a father of two. Moreover, as the actor has kept most of his personal affairs private, the public knows little about his girlfriend and children.

So, why don’t we learn five interesting facts about Hugo Weaving’s son, Harry Greenwood or Harry Weaving, in this article?

Hugo Weaving and his partner Katrina Greenwood welcomed their son, Harry Weaving Greenwood, in 1989. As Hugo and his girlfriend raised their son away from the influence of media, Harry’s upbringing remains a mystery. Nonetheless, seeing as the eldest of Hugo’s kids has grown up to be a wonderful man, one can assume that the actor raised his son properly.

Harry’s parents then welcomed a daughter, Holly Greenwood, in 1993. Harry and Holly are close to one other, and the siblings frequently appear on each other’s Instagram. Looking at the photographs, it is evident that the brother and sister support one another.

Harry and his sister also visit different places with their parents. Additionally, Katrina’s son frequently thanks his family for their continuous love and support. So, it is safe to state that the Weaving siblings have a great relationship with their father and mother.

For the time being, let us wish Katrina Greenwood and Hugo Weaving’s son well and hope that his bond with family grows stronger with time.

Harry Greenwood’s parents first met when they were kids as they lived in the same neighborhood. Yet, Hugo and Katrina never got to know each other well until they had both grown up. Harry’s mom and dad then started dating in 1984 when they were both in their 20s and have been together ever since.

Despite this, the Lord of the rings actor and his partner have no intention of ever lawfully becoming husband and wife. Harry’s father has made it clear that marriage is insignificant to him. According to the veteran actor, you either know or don’t know if your relationship is solid, and if you know it is stable, it doesn’t matter whether you are officially married or not. Furthermore, the celebrity has also stated that he dislikes weddings.

Well, Hugo and Katrina appear to be content with their unmarried status. So, we might never see Harry’s parents marrying in the future.

It is common in Hollywood for children to follow in their mom and/or dad’s footsteps. Having a famous parent, or in some cases parents, almost always guarantees a head start in the industry. So, many celebrity kids don’t hesitate to pursue a career in the same field as their mother and father. That being said, these children work just as hard as anyone to meet everyone’s expectations.

Moreover, many celebrity children start right from the bottom. For example, Hugo Weaving’s child began his acting career booking in minor roles and participating in school plays before landing roles in notable films. At present, the celebrity child has over a dozen acting credits to his name.

The following are some of the films and series Harry has starred in, along with the character he played and timelines:

In addition to the above-mentioned works, Harry also starred as Leo Jacobs in the drama series Total Control. His performance in the series has been appreciated by fans and critics alike. While his acting has yet to earn him any awards or nominations, there is no doubt that his work will make headlines at some point in the future.

So, let us wish Weaving’s son the best for his future pursuits.

Since he is a child of a well-known personality, Harry’s name often comes in the limelight. His mysterious way of living has piqued the public’s interest in learning more about his personal life, including his love life. To no one’s surprise, the question of who Harry Greenwood’s girlfriend is has sparked much debate.

Unlike other celebrity children, Katrina Greenwood and Hugo Weaving’s son has no problem with his admirers finding out about his girlfriend, Milena Bennett. Harry’s girlfriend is a Sydney-based photographer who frequently posts adorable photos of him on her Instagram feed.

Harry and his girlfriend have been together for more than ten years. In addition, the couple recently bought a house together.

Taking a look at the pictures on Greenwood’s Instagram, it is evident that he and his sweetheart are both pet lovers. The pair also loves traveling and are frequently traveling to different places.

Despite being together for so long, the love-smitten couple has yet to tie the knot. However, given how much the couple adores one another, Harry and Milen’s marriage is inevitable. Well, if they ever do decide to marry, we hope that the couple will share the news with their admirers.

Prefers To Live Away From The Limelight

It is no secret that Harry Weaving’s parents raised him in privacy. So, it is not surprising that the celebrity child adopted a private lifestyle as he grew older.

Katrina Greenwood and Hugo Weaving’s son is an aspiring actor, yet, this has not stopped the popular celebrity kid from steering away from the limelight. Moreover, Harry has only made a few red carpet appearances to date.

So, while Hugo Weaving might be one of the biggest names in Hollywood, we might have to wait a while to see his son sharing the same spotlight.

The name Harry is a medieval form of Henry, and it is generally a male name that means Army Ruler.