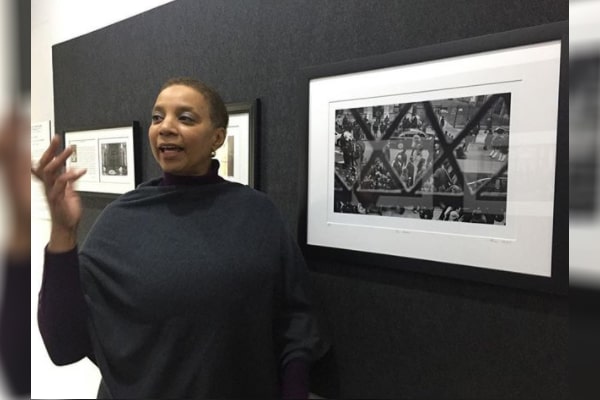 Ossie Davis is a legendary actor and civil activist who married his co-star and Grammy winner, Ruby Dee, in 1948. The pair made several contributions to the Civil Rights Movements.

Besides working for society, Ruby and Ossie welcomed three beautiful children who kept their parents’ legacy. Today, we will be talking about one of three Ossie Davis’ children, Hasna Muhammad Davis. Let’s go.

Hasna Muhammad Davis, Ossie Davis’ daughter with late actress, Ruby Dee is a phenomenal photographer and writer. She uses her visual arts and ever so flowy words to shed light on social and human conditions and draw attention to the extraordinary. Although these could be the words Hasna is described, her portraits truly embody the person’s soul, and her writings pierce your heart.

Besides being an artist and poet, she is also the creator of Crumb Navigation, a line of quotations about being and living well.

Aforementioned, Hasna is a visual artist, but in reality, she is a treasure box of bits of everything. Besides being a poet and a photographer, she also has a background in the education field.

Ossie Davis’ daughter, Hasna, is an educator who served in several school districts in the Hudson Valley in New York with a specialty in human resources, organization and leadership, and professional development for teachers and administrators.

As the offspring of one of the greatest artists and most active civil rights activists, Ossie and Ruby, Hasna is trying to keep her parents’ legacy intact.

Hasna, her siblings, Nora Davis Day, and Guy Davis share their parents’ teachings through an organization called Ossie and Ruby. The Davis siblings continue to share what their parents taught them through love, art, and activism.

Hasna and her siblings further celebrated their parents’ philanthropic efforts by teaming up with the United Negro College Fund for a centennial scholarship in their father’s name. Additionally, they celebrated Ossie’s 100th birthday by donating to the National Museum of African America History and Culture and The Black Academy of Art and Letters in 2017.

Dr. Hasna Muhammad talks about growing up as the daughter of Ossie and Ruby Dee Davis. #DaughtersOfTheMovement #PoliticsNation pic.twitter.com/n4fpDfT0ks

Furthermore, Ossie Davis’ daughter, Hasna, is working with the daughters of several Black Civil Rights Movement icons to continue the work of their parents.

While talking about Hasna Muhammad’s mother, she describes her as a fierce and fearless woman when it came to advocating people. That’s how Ruby nurtured her and her siblings and why they are always excited to share their values.

Married And Proud Mother Of Three

Born to one of the greatest, Hasna grew up to build her own family with musician Wali Abdul Muhammad. It is not known when the couple met, but the marriage resulted in three beautiful children.

Hasna Muhammad’s son, Muta’Ali Muhammad, is an actor and producer known for his works in Turtle vs. Octopus, Avenger Assemble!, and Return to the Jackapole.

Similarly, Hasna’s son, Jihad Muhammad, is a portrait photographer and runs AN-NŪR MEDIA. Furthermore, he is as talented as his mother. Likewise, her daughter, Ihsaana Muhammad, is a chef and the oldest of three.

The family of five is kind and delighted. Ossie’s kid often makes a corner for her family amidst her phenomenal works and words. Although she is often behind the camera, Hasna appears to talk about her parents’ legacy and achievements proudly.

If Ossie Davis and Ruby Dee were alive to see her work for the welfare of the world and her community via art, they would’ve been proud. On that note, let’s hope she keeps up the excellent works and continues to thrive in the coming days.

The name Hasna has an Arabic origin, which means beautiful.