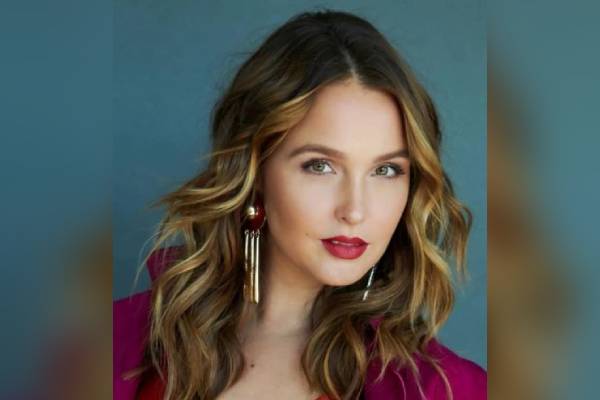 Hayden Alan is the first child of Camilla Luddington and her husband, Matthew Alan. She is growing up with her brother in Los Angeles. At such a young age, Hayden is already famous as Camilla Luddington’s daughter.

For now, let’s learn in detail about Camilla Luddington’s kid, Hayden Alan, and her childhood.

As stated earlier, Hayden Alan is the first-born child of Camilla Luddington and her husband, Matthew Alan. Her parents welcomed her on April 11, 2017. Hayden’s mom, Camilla, made her pregnancy news public in October through an Instagram picture where she posed with a pumpkin decorated with the message “BABY ARRIVING SPRING 2017” in golden letters.

Furthermore, Camilla shared the news of her baby daughter’s arrival on Instagram, where she uploaded a video of the couple holding the baby. In addition, she captioned the post saying she has a new great love in their lives, i.e., their sweet baby girl, Hayden.

Three years after her birth, Hayden Alan’s parents gave birth to her baby brother, Lucas Matthew Alan, on August 25, 2020. Hayden has a good bond with her brother, and she loves him very much. And their parents are raising the brother-sister duo with great love and care.

Was Born While Her Parents Were Dating

It has not been that long since Hayden Alan’s parents, Camilla Luddington and Matthew Alan, walked down the aisle. Hayden was born to her parents two years before they exchanged the vows. The lovely pair of Camilla and Matthew met for the first time while working at an LA restaurant together.

The adorable couple dated for more than 10 years before getting engaged on New Year’s Eve 2018. Hayden’s mom shared the news of their engagement via Instagram post. Furthermore, one year after their engagement, they got married on August 17, 2019, in an intimate California coastline ceremony.

The couple’s best friend, Shawn Aly, officiated their ceremony, which was attended by 70 of their closest friends, including Jessica Capshaw and family members.

Camilla later posted the details about the wedding venue, decorations, and her bridal dress on her Instagram. Hayden Alan’s dad and mom are deeply in love with each other, and they don’t shy away from sharing their love for one another via Instagram.

Hayden Alan’s mama often posts several pictures of hers. In one of her Instagram posts, Camilla uploaded a picture of Hayden clicking a photo on the beach. In the caption, she described that Hayden is her little baby photographer and is really good at taking pictures. She further mentioned that they had kept tons of polaroids that she’s taken.

Who knows, Hayden might become a successful photographer in the future.

Plus it looks like Camilla is also pretty secretive about her growing child, as she hasn’t revealed her kid’s face fully yet.

Her Parents Are Involved In The Entertainment Industry

As stated earlier, Hayden Alan has already become famous at such a young age as the popular actress Camilla Luddington’s daughter. Hayden’s mama is a well-known actress who came into prominence for her role as Dr. Jo Wilson in Grey’s Anatomy. In her acting career, she has acted in several films and television series, which have helped her gain immense fame and fortune to her name.

Just like her mother, Hayden Alan’s dad is also an actor. In the initial phase of his acting career, he worked with Stevie Wonder for the Bud Light beer television commercial “The Lucky Chair.” The commercial was premiered during the 2013 Super Bowl. After that, he has made appearances in different television series and films.

Nonetheless, we can hope that Camilla Luddington’s child, Hayden Alan has a great future ahead.

The name Camilla has an Italian origin, which means “Perfect.”