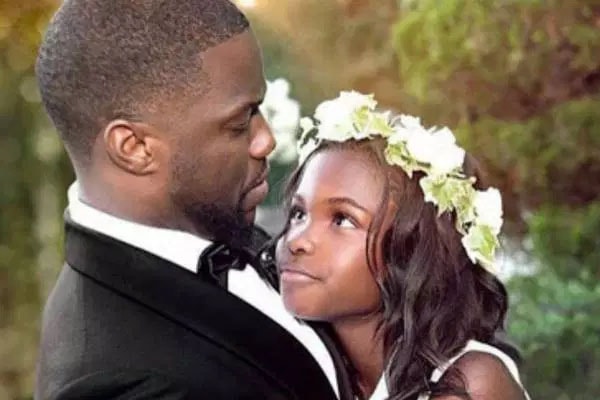 The adorable thirteen years old beauty, Heaven Hart born on March 22, 2005, is the only daughter of the American comedian Kevin Hart with his ex-wife, Torrei Hart. The young Hart is the elder sister of eleven years old brother, Hendrix Hart.

The proud parents of two children, Kevin and Torrei, were together since the year 2003. However, the former soulmates parted their ways in 2011 after filing for divorce in 2010. The family shares a strong bond despite the divorce.

Heaven Wants To Be A Entertainer Like Her Father

The American comedian’s daughter, Kevin Hart’s daughter, Heaven wants to be an entertainer like her comedian father, Kevin Hart. Daughter Heaven has a dream of carrying on the family profession and build a name in the entertainment industry. However, Father Kevin has different plans for his daughter and is holding back her dreams. According to The Secret Life of Pets voice actor, he has made a daddy decision of holding his daughter, Heaven’s dreams back until she is eighteen.

The father of two adorable kids, Kevin, wants a normal life for his kids and it is equally important for the young kids to get an education while they’re still young. The caring father is concerned about how their kids would turn out to be after receiving childhood stardom.

The eldest daughter and the only daughter of the Hart family entered her teenage life with a bang and her parents were there to make sure she did it in the right way. The former soulmates teamed up to throw their baby girl an epic “Black Panther and Marvel” themed birthday party for her thirteenth birthday. The lavish party took place at the popular kid’s play palace, Sky Zone Trampoline Park in San Francisco Valley. The birthday was attended by several celebrities along with a private performance by the famous, Rae Sremmurd.

According to the loving parents, they wanted Heaven to know that despite their busy schedules, she always came first. The proud parents both put their entertainment jobs on hold to celebrate a festive night with the friends and family. The adorable Hart is still a growing kid and it’s uncertain if she is also going to share the same entertainment passion as her parents.