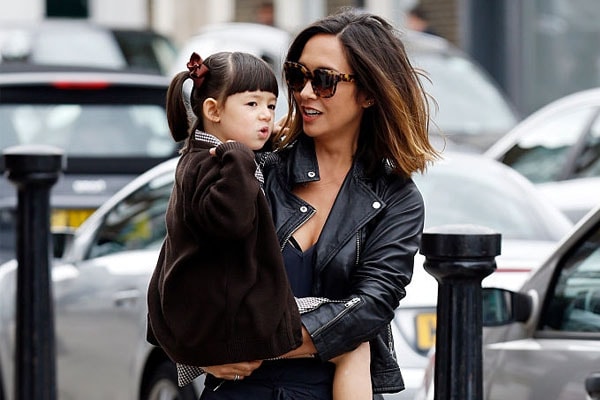 The gorgeous Hero Harper Quinn is not the only child of Myleene. She also has got an elder sister named Ava Bailey Quinn. Hero Harper’s sister Ava Bailey was born on the 16th of August 2007 and is almost four years older than her small sister.

We all know how much of a great singer Myleene is and It looks like her daughter Hero Harper is following her footsteps. Myleene gives her little one knowledge regarding music, and it’s different components. They also practise it together. The mother-daughter trio of Myleene, Hero Harper and Ava Bailey first performed together in front of none other than Prince Charles, Duke of Cornwall and Duke of Rothesay.

While performing alongside her daughters, Myleene’s happiness seemed to contain no boundaries. She really must have been proud of her little ones.

Not just performing, Hero Harper also tends to do a lot of fun-filled stuff with her mother. She goes fishing, swimming, attend different events and most of all she is her sparring buddy. It seems like Myleene is training her daughter Hero from a very early age.

Now only time will tell us that whether or not Myleene Klass’ daughter Hero Harper Quinn will be like her or not.

Hero Harper Quinn’s parents, Myleene Klass and Graham Quinn got divorced in 2013. And since then Hero has been living with her mother, Myleene. But despite not staying together Hero Harper has got a lovely bond with her father, Graham. At times Graham tweets about his daughters and states how much he misses them.

Happy Father’s no matter if your been denied your rights as a Dad or not ..never forget your worth or stop trying❤? pic.twitter.com/ft1oDIacro

When Myleene named her youngest daughter Hero Harper, she faced a lot of criticism from people. But she then stated that she was inspired by the character Hero from William Shakespear‘s Much Ado About Nothing. The name Hero has a Greek origin which means “demi-god.”

As for the name Harper, it is the transferred use of the surname which was derived from the Middle English harp.